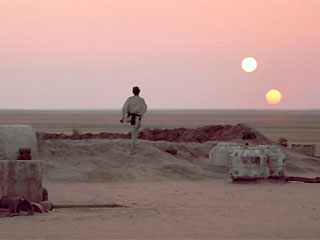 Never, ever forget your sunscreen on Tatooine.
"I cannot tell you what it meant to me to see the two suns of Ferro set behind the dry mountain east of my home."
— Opening line of A Dry, Quiet War by Tony Daniel
Advertisement:

A Sub-Trope of Alien Sky where a planet has two suns in the sky, either orbiting one of them or travelling in a long orbit around both of the stars. Occurs primarly in sci-fi settings, but certainly isn't limited to it.

It is uncertain how likely it is that habitable planets would form in the presence of two suns (for the sake of Rule of Cool, though, it's best not to ask). So there is still some Artistic License – Space involved. Also keep in mind that everything would of course have two shadows, though if the suns significantly differ in luminosity then the one shadow will be noticeably darker than the other.

Types
There are three realistic possibilities for this arrangement:

There are also unrealistic and unstable configurations:

Type IV and V would realistically decay into:

Planets have been found in trinary and quaternary star systems, but the more stars you add (up to septenary systems have been discovered in real life), the harder it becomes to find a stable orbit for the planets to occupy.