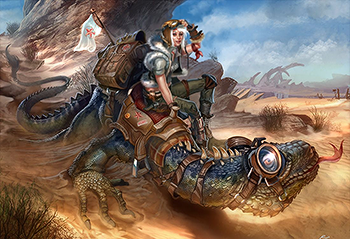 .
"Allow Me to explain. About 50 years ago the foolish practices of the humans combined with natural disasters to destroy most of the world except for this terrible desert...
...Not that a little global holocaust discouraged the humans from pursuing their foolish wars. Then when we thought everything had calmed down, the single river that sustained this world, the life of our desert, suddenly stopped...
...With absolutely no chance of rain, as usual, more deaths are predicted."
— Sand Land
Advertisement:

The term "Wagon Train to the Stars" had more relevance than we thought. Much of humanity has gone to outer space, but apparently all the planets they could settle on were dry, desert-covered worlds.

A big advantage of setting a sci-fi world in a desert is that it's easy to conceptualize, compared to a geographically and culturally diverse world like Earth. The author doesn't have to spend time explaining the history or nuance of the world because there is none. Also, judging by the planets we've been finding around other stars in recent years, while potentially inhabitable planets seem plentiful, earthlike ones seem slightly rarer, with slight variations in size, composition, and average temperature making the difference between an Earthlike mixture and a comparative ice world, water world, or desert world. A moderately large galactic empire would almost certainly put up at least a token effort at setting up outpost colonies on some of the less pleasant worlds, if just to have a place to put your Landfill Beyond the Stars.

When life becomes hard, and on such a world, it usually is, morals are the first thing you throw away. Law and order are swift to break down, and suddenly we have The Wild West on another planet. Also, it's wise to be wary of Desert Bandits.

For the anime and manga that is also an example of the genre, see Desert Punk.

It wasn't until the sequel game that Pandora was shown with more diverse biomes, so the majority of this game features dry, arid deserts filled with rusted out hunks of debris and metal.

It wasn't until the sequel game that Pandora was shown with more diverse biomes, so the majority of this game features dry, arid deserts filled with rusted out hunks of debris and metal.