Manga / Children of the Whales 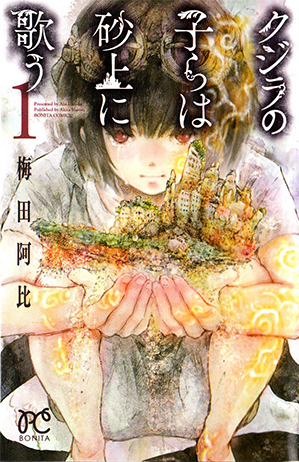 "We loved this island, for it was our entire world."
— Chakuro
Advertisement:

Year 93 of the Sand Era. In a vast, endless sea of sand, a lone colony of people live upon an ever-moving island known as the Mud Whale. Chakuro, the archivist of the Mud Whale, chronicles the lives and deaths of the people who live there. The five hundred souls of the island are divided into a majority of "marked ones", short-lived people who can use a psychokinetic power known as Thymia, and a small minority of "unmarked ones", who don't have any powers but have normal lifespans and rule the ship. While people on the Whale know nothing of the outside world, or if there even is such a thing, they live a simple but happy and peaceful life, playing around, cultivating their land and falling in love. One day, however, they come across an island not unlike their own, only to find a graveyard and a wounded Emotionless Girl who calls them "the criminals of Falaina". This discovery may announce the end of their world…

Kujira no Ko-ra wa Sajou ni Utau ("Whale Calves Sing on the Debris") is a shojo fantasy series by Abi Umeda. It launched in 2013, and has been licensed for release in English starting in November 2017 (it's been published in France by Glénat since 2016). An anime adaptation aired in Fall 2017 in Japan; it launched on March 13, 2018 internationally via Netflix.

Children of the Whales contains examples of: