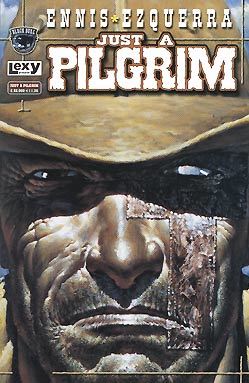 Just a Pilgrim is a comic series by Garth Ennis and Carlos Ezequerra. It follows the tale of a mysterious Christian traveller in a post-apocalyptic setting. The storyline, however, is anything but Christian. It also has a sequel, Pilgrim: Garden of Eden.

Just a Pilgrim provides examples of: