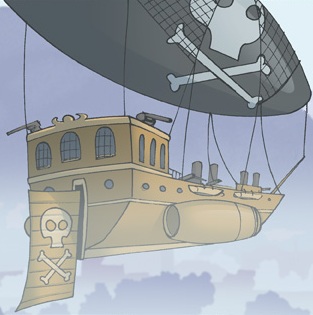 A ninja's second-worst nightmare.note They could also be on fire.
"Take the sky by thunder! (Thu-under!)
It is so wonderful to plunder! (Plu-under!)
When a village needs a pillage. (Ooh-aaah)
Or my pockets need a fillage. (You know what I'm saying?)"
— TaleSpin, "Sky Pirates"
Advertisement:

As You Know, The Sky Is an Ocean, so it's only logical that it must have pirates as well. Sky-rates, if you will.

Following all of the tropes applicable to pirates except for using aeroplanes (or better yet, airships, especially cool ones, or even better: flying boats!) instead of boats, Sky Pirates (sometimes referred to as "Air Pirates") were fairly popular in the early days of aviation, though they were soon eclipsed by Space Pirates once aeroplanes became less novel. Nowadays, Sky Pirates are mostly found in the yellowing pages of 1920s and 30s comics and pulp magazines, in modern media intended to evoke that era, and in Steampunk settings. There is another, more contemporary, version of this trope, usually found in more "realistic" settings; these are essentially Ruthless Modern Pirates who use aircraft. No traditional Sky Pirate story is truly complete without at least one Airborne Aircraft Carrier. Huge zeppelins and giant flying boats are par for the course as well, as are other magnificent flying machines. The punishment of walking the plank is especially deadly when it's administered by a sky pirate after a High-Altitude Battle. Sky pirates are naturals for pulling off a Sky Heist.