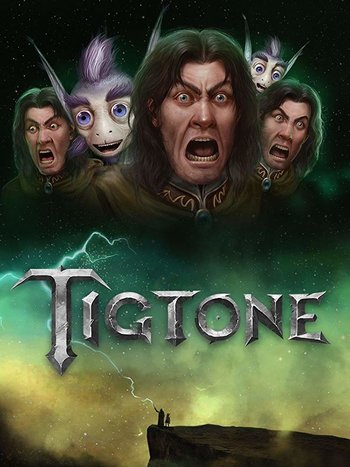 From left to right: Tigtone, Helpy, Tigtone, Helpy, and Tigtone. In the bottom: Tigtone and Helpy.
[writing in journal]
Dear journal! You know me as the heroic master of questful combat! Friend to the very stakes of the world! I know me as...HYA!
[stabs page with quill]
Conviction! Adventurepreneur! THIS FACE! For I have all these things in common, and my name is... TIGTONE!
[beat]
No, journal! "Tigtone!" One word. That's Tigtone. With a "T". So sayeth... Tigtug?!
— Tigtone, "My Name Is..."

in which 2-D painted characters' faces morph to follow the mouth movements and facial expressions of the actors. The result is bug-eyed madness with each step.

The show chronicles the (mis)adventures of the titular Tigtone (Nils Frykdahl), a Heroic Comedic Sociopath adventurer who brags to his journal while completing quests using unscrupulous and downright loony methods, almost always involving extreme violence. Following him is Helpy (Debi Derryberry), Tigtone's good-natured sidekick who suffers frequent gruesome injuries. But it's fine since he has regenerative abilities and can't die normally, making him the ideal companion for Tigtone. Together, the two travel around the medieval fantasy kingdom of Propecia searching for all sorts of quests to complete.

Rather than mocking fantasy literature, Tigtone specifically mocks the video games that have sprung from the fantasy genre, complete with references to gameplay mechanics such as sidequests and zones, and with video game noises at (in)appropriate moments. A surreal parody that mocks all kinds of cliches, tropes, and other silliness, it is therefore Troperiffic.

The first installment, a short movie called "The Begun of Tigtone

", was crowdfunded and released on YouTube in 2014; a series of twelve short skits called "Tigtone's Journal" was released that same year. In 2018, "Tigtone and the Pilot" was aired with 3 other prospective pilots by Adult Swim. Tigtone was picked up for a full series later that year, and began airing in January of 2019. The show is directed by Frederic Cristy and Benjamin Martian, and produced by Babyhemyth Productions in association with Titmouse, Inc. and Williams Street. Along with the first season, another set of eight short skits titled "Dear Journal" was released on Adult Swim's YouTube channel. A second season premiered on September 13, 2020, although the episode "Tigtone and Tigtone's Island" was released early on April 1, 2020.

On August 30, 2021, Tigtone's co-creator Benjamin Martian announced on Twitter that the series will not be renewed for a third season.

This animated web show and TV series provides examples of:

Example of:
Our Centaurs Are Different