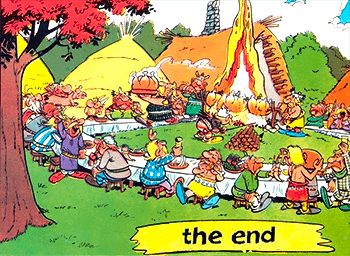 Rarity: Post-apocalyptic donuts. Interesting choice.
Twilight Sparkle: I know. But there's gonna be plenty of time for all the challenges and struggles and adventures to come. For now, I just want to spend a quiet moment with the six best friends I've ever had.
— My Little Pony: Friendship Is Magic, "The Ending of the End - Part 2"
Advertisement:

Basically, a work ends by showing a relatively light-hearted scene where the hero and his friends decide to go grab a bite to eat. May or may not include a final conversation to wrap up a few loose ends in the plot, but generally just as often the plot ends right at the invitation or decision.

If it's a guy inviting a girl out to dinner (or vice-versa), it can be used to show that their relationship has progressed beyond Just Friends or "merely professional."

Title is a play on the term "Good End" sometimes found in video games. See also I Was Told There Would Be Cake. Compare Dance Party Ending, where the work ends with a similarly light-hearted scene, but with dancing rather than eating.

Spoilers ahoy. Please note this is an ending trope.

Pooh and his friends celebrate Thanksgiving together.

Pooh and his friends celebrate Thanksgiving together.