Continued from "The Ending of the End – Part 1". 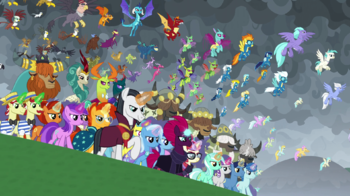 EQUESTRIA!... Assemble.Alternatively EVERYCREATURE IS HERE!
Pinkie Pie: What are we gonna do, Twilight?!
Twilight Sparkle: The same thing we do every time, Pinkie. Try to save the world!
Written by Michael Vogel

With Tirek, Cozy Glow, and Chrysalis having captured those who remained behind to buy Twilight time to escape, Cozy is eager to kill them as quickly as possible. However, she is discouraged by Chrysalis, who believes it would be more humiliating to first display them to the rest of Equestria as proof that their heroes lost even while alive. Tirek, still, argues that their most pressing concern is finding Twilight before doing anything else, reasoning that with her free they still face a constant threat. Chrysalis attempts to reassure him by noting that even without Twilight, her friends are still imprisoned with no way to use their magic, the Trio having re-purposed the pieces of Chrysalis' throne that Shining Armor brought over to act as a magical suppressor to their prisoners. Though she warns Cozy that even their magic is vulnerable to the shards if they get too close (Chrysalis' changeling magic now being fused with Grogar's making her susceptible), she gloats at how the three of them only got as far as they did because of "Grogar's" help, yanking over a chained up and humiliated Discord. Cozy attempts to absorb the remaining magic from the bell while the other two are momentarily distracted, but is stopped by Tirek. He reminds her of what happened the last time she tried to take Discord's magic, and she argues that she only wants the Princesses' that she drained earlier, prompting Chrysalis to snap at her about wanting to take all the power for herself. Cozy says she deserves the alicorn magic because she's "the best" of the three, as the Trio descends into bickering. As they argue, the Mane Five and Spike attempt to devise a way to escape, but Chrysalis' sticky webbing is too much of a challenge to navigate past. Discord again apologizes for having been responsible for the Trio's rise to power, as Tirek yells at Cozy that none of them can absorb the Princesses' magic without first learning how to control Discord's Chaos magic. Discord interjects by promising to tell them how to control his magic, but only with the caveat that they spare his friends (and ask nicely). Tirek reasons that Discord is simply lying in exchange for a favor, to which Discord retorts by saying he'd never tell Tirek how to control his magic after Tirek's betrayal the last time they worked together. When Tirek threatens to destroy him if he continues his insults, Discord smugly responds by arguing that Tirek is only obsessed with gaining magic because he's afraid he'll never live up to his father, King Vorak's, expectations. An enraged Tirek fires an energy blast at him, but he deflects it using a piece of Chrysalis' throne. Though the villains at first believe Discord failed in hitting one of them, it's revealed that he was actually aiming at Starlight's cage. She uses a magical shockwave to free the rest of the prisoners, staying behind with the others to give the Mane Five and Spike the opportunity to escape and find Twilight.

They break into the castle courtyard where they come across a terrified unicorn. He explains that the unicorns have taken shelter in Celestia's School of Magic, apathetic to where the pegasi and earth ponies are. Though worried at how divided everyone has become, the six decide to head to Ponyville in hopes of finding Twilight, as a light snow begins falling. They arrive to find a scared mob of earth ponies who demand they fix things immediately. Rainbow Dash gets into an argument with one angry citizen when she complains that earth ponies don't have magic or flight to protect themselves with, noting how the pegasi have blocked off Cloudsdale to any other creature. Not finding Twilight in the crowd, the six try to puzzle where she teleported to, whereupon it dawns on Spike that she must have teleported to the Crystal Empire to be with her family. Once there they reunite with a depressed Twilight, who admits that she has spent hours studying in the vain hope of finding a way to stop the Trio, but Grogar's bell is just too powerful. To compound this, she believes that all of their previous victories have been meaningless, as no matter what they've done the villains always seem to succeed in chipping away at them each time they make an attack (most notably Sombra destroying the Tree of Harmony). They try to cheer her up by saying that if nothing else the seven of them are still together, with Rainbow Dash mentioning that at least things can't get any worse. They hear a ghostly braying and open the window to reveal that the Windigo spirits have been summoned back to Equestria by the ponies' continually growing division, threatening to turn the landscape into a frozen wasteland if left unchecked.

Back at Ponyville, the earth ponies flee from the Windigo threat with the excuse that it's the pegasi's problem, focusing in on a disgruntled-looking Sandbar before cutting to various other students of Twilight's school, each concerned with their respective race's isolationism and apathy. Twilight, meanwhile, only sees the Windigos' return as further proof of the futility to continue trying to fight. Applejack bluntly explains that bad things are always going to happen, but to respond by simply giving up is the absolutely wrong way to deal with them. Twilight angrily retorts that by being unable to notice the growing division between the pony races, she's failed as the Princess of Friendship, scared that she'll never be ready for the tasks ahead as ruler of Equestria. Fluttershy quietly reassures her that, as someone whose entire life revolved around being scared of everything, she's managed to grow "less scared" so long as her friends are with her. The rest each add that they've all faced difficult situations before, and that they wouldn't be the strong people they are without having met Twilight. Upon hearing this, Twilight finally regains her self-confidence, admitting that even the Princess of Friendship can forget that there's more to being friends than rainbow lasers (though they are pretty cool). Cadance and Shining Armor enter, ready to help fight, but Twilight dissuades them, saying they need to protect Flurry Heart above all else, as if the seven of them fail she would become Equestria's last hope. Twilight summarizes how stacked the odds are against them, prompting Pinkie to ask what they're going to do. Twilight simply says they'll do what they do every time: Try to save the world.

Returning to the villains, they notice the Windigos have returned, and Chrysalis suggests not using the bell to get rid of them, much to Tirek and Cozy's dismay. She argues that if they let the Windigos tarnish the land the ponies will become so desperate for relief that they'll willingly bow down to her in exchange for her banishing them. Tirek rebukes her with the warning that the Windigos are ancient and poorly understood beings, and that it would be safer to get rid of them as quickly as possible before their power grows out of control. Cozy cuts their argument short by pointing out that the Mane Six and Spike have returned. The three teleport to their enemies with the bell, gloating how they continue to fight even when it's hopeless. Twilight attempts to explain how as long as she has her friends, there is always hope, but is interrupted by an impatient Cozy Glow. Twilight teleports them a short distance away to devise a plan where she, Rainbow, and Pinkie will act as decoys to distract the Trio while the remaining four attempt to get a hold of the bell. They nearly succeed, but Chrysalis gets wise to their act and blasts the four away before they can obtain it. After managing to fight back each of the Mane Six, Chrysalis succeeds in forcing them to stop attacking by threatening to rip Spike's wings off if they continue to resist them. Tirek gloats about how their own friendship proved to be their undoing, readying to deliver a killing blow along with the other two. The seven accept their fate, huddling together as the three fire a massive energy blast at them. As the screen is engulfed in blinding white light, the group is surprised to find a magical barrier protecting them from the Trio's magic. They turn to see dozens of reinforcements from the combined Equestrian races having arrived to aide them. As the villains are distracted by being overrun with dozens of enemies, the seven friends are magically lifted to safety by a large group of unicorns working in tandem. When Twilight asks what convinced them all to come help, the Young Six reveal that they and several other students of Twilight's school all managed to convince their respective races to put aside their fear and distrust to instead help Twilight and her friends fight the Trio.

However, the villains quickly start to pick off their attackers just as the unicorns' shield fails. Twilight fires an energy blast at the three to halt their advance, and teleports all of their prisoners onto the hilltop with the rest of the reinforcements. As Twilight monologues how friendship is a power shared among all races, not just her friends or ponies, the Mane Five, Spike, Pillars, and Young Six are all magically lifted around her. Their combined Friendship Magic joins together with Twilight to create an enormous rainbow laser that blasts away the Windigos before firing at the Trio, draining them of all their absorbed magic and returning them to their original forms. An enraged Chrysalis yells at the heroes that the three of them will never be stopped, and they will always come back to try to take over Equestria and destroy their friendship. In the middle of her rant, however, a giant cupcake crushes the three. The heroes look to Discord who says he had nothing to do with it, before noticing that Pinkie recovered Grogar's bell and absorbed Discord's Chaos magic. She temporarily grows massive and slightly insane before Discord flies up to retrieve the bell and reabsorb his magic. After returning the Princesses' magic to them, they confront the trapped villains with Celestia announcing that there is no punishment great enough to pay them back for their actions. Discord whispers a suggestion to the two, who agree it sounds quite fitting. He joins them in firing an energy blast at the Trio, turning them to stone the same way Discord was. Discord snarks that it is only fitting that the three who hated friendship so much are now forced to be together for all eternity.

Celestia affirms that with her defeat of Tirek, Cozy, and Chrysalis, Twilight has once-and-for-all proven herself ready to take on the role as ruler of Equestria, with Discord himself giving an approving nod and slight bow. Twilight accepts her title, with her first action being to postpone her coronation to give her and her friends time to recuperate from their battle. The seven head over to Pony Joe's doughnut shop for a post-fight meal. Fluttershy comments on how it feels like the end of era, but Rainbow argues that it is merely the beginning of an "even more awesome" one. Twilight reassures everyone that no matter what coming challenges they may face, things will work out perfectly. After all, so long as she has her friends by her side, how could things unfurl any other way?