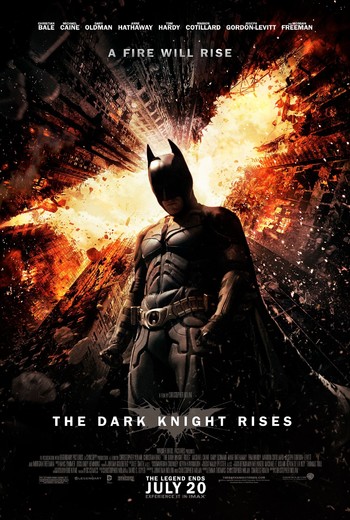 The legend ends.
Selina Kyle: You don't owe these people anymore. You've given them everything.
Batman: Not everything. Not yet.
Advertisement:

Eight years after the events of The Dark Knight, Bruce Wayne (Christian Bale) has retired from his work as the Batman and settled into an unhappy (and secluded) life as the CEO of Wayne Enterprises. The Dent Act has helped the police slow the spread of organized crime in Gotham City to a controllable crawl without Batman's help. Commissioner James Gordon (Gary Oldman), now resigned to paperwork instead of fieldwork because of the downturn in crime, has to deal with attempts by other city officials to drive him out of office for good — while keeping the truth about Batman's disappearance a secret so Gotham can retain its newfound peace.

But the peace Batman has given his beloved city comes under threat just when Gotham needs him the most. A wily thief named Selina Kyle (Anne Hathaway) draws the Batman out of hiding by robbing Bruce Wayne, but it's the appearance of the masked terrorist Bane (Tom Hardy) in Gotham that sets off a firestorm of events that ultimately forces Batman to consider how much he's really willing to sacrifice in order to save Gotham City.

Warner Bros. went on to reboot the Batman movie franchise twice since, in 2016 with Batman v Superman: Dawn of Justice (which is part of the DC Extended Universe) and in 2022 with The Batman.

The Dark Knight Rises contains examples of the following tropes:

Batman finally gets a taste of his own medicine.

Batman finally gets a taste of his own medicine.