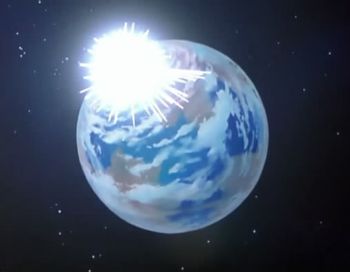 Fortunately it was Sunday, so there wasn't anyone on the continent they just destroyed.note The continent would have been completely occupied the next day, though.
Pat Mustard: Better get out the earplugs, Father, because when that milkfloat goes up, you'll hear it all the way to the North Po—
[cut to North Pole] *BOOM*
— Father Ted
Advertisement:

The camera cuts away to some far-off and completely unrelated setting (such as space) and we see the rather minor (by this perspective) result of The Take. The obvious implication is it must have been pretty spectacular at ground zero. If it's not being Played for Laughs or visual spectacle, expect a reaction shot from the horrified witnesses.

When a distant reaction shot is used for censorship reasons (whether to cover up bad language, violence, someone about to throw up, or sexual intercourse), then it's a Discretion Shot.

Often used for the Apocalypse Wow. The Scream is a specific version of this.