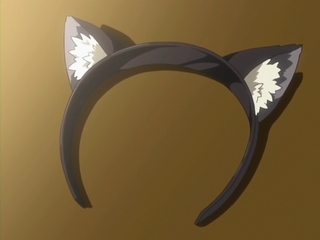 In fiction, there are many ways to show a character is cute. You can give them cute hair decorations. You can give people a Little Bit Beastly Cute Monster Girl. Or, you can give a hint of both, which is where this trope lies.

Adding fake animal ears is a way to keep the media within the bounds of reality and avoid potential Squick while still having the appeal of a Bunny or Cat Girl. They are most often found on a headband, but can also appear on hats, hoodies, or other hair decorations and head coverings. They can sometimes be accentuated with fake tails. Most common are cat ears, although fox, bunny, and dog can also be found.

This is a standard accessory for the Playboy Bunny outfit. It is also a common prop for Cosplay. May be seen on the Bunny-Ears Lawyer.