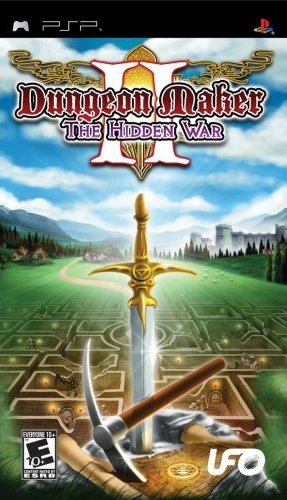 Dungeon Maker II: The Hidden War is a Dungeon Crawling action RPG created by Global A Entertainment and published by UFO Interactive.

Seventy thousand years ago the world was ruled by the gods, who claimed that humans should have dominion over their own lives, yet still enslaved them and enforced their own will on them. The demons stood up against the gods' hypocrisy and for their heresy the gods declared war on them. Over the next forty days they called down tsunamis, lightning, and meteors and wiped out almost every human and demon in existence. Still, the demons had made their point. The gods and demons made peace and allowed what was left of humanity to live in freedom. This treaty would last for exactly 70,000 years.

Now the treaty is over. Most of the gods, demons, and humans are content to let the peace and freedom continue, but one demon is too obsessed with pride to let the gods' victory stand. He calls himself Revenger and he's determined to restart the war against the gods, even if it means The End of the World as We Know It.

As the new Dungeon Maker for the town of Kalliope your job is to build a dungeon fit for Revenger himself, to lure him and his fellow monsters in, and to kill them in the name of world peace. To aid in this quest are the town guard's granddaughter who wants to become the apprentice of a Dungeon Maker (and who becomes playable later in the game) and a small, transforming monster called a genju, as well as the various townspeople of Kalliope.