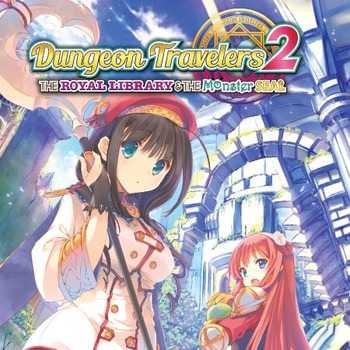 This is by far the least risqué artwork in the entire game...
Dungeon Travelers 2: The Royal Library & the Monster Seal is a Dungeon Crawler Eastern RPG released on March 28, 2013 in Japan for the PlayStation Portable and September 2014 on the Play Station Vita. The game was released in America by Atlus on August 18, 2015, and in Europe by NIS America on October 16, 2015.
Advertisement:

A sequel titled Dungeon Travelers 2-2 had an original 2015 Japanese release, but was delayed for Western audiences.

The game garnered notoriety before its American release when Atlus announced the game would have to be mildly censored to avoid an AO rating from the ESRB.

The game is a sequel to To Heart 2: Dungeon Travelers, which itself was an RPG take on the Visual Novel To Heart 2.

Vile creature, return to my book!