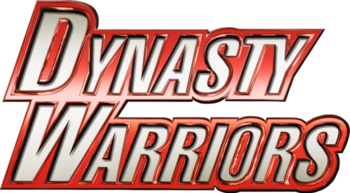 Dynasty Warriors (真・三國無双 Shin Sangoku Musou note Literally "True — Three Kingdoms Unmatched"; the first game was titled simply Sangoku Musou in Japanese, often called simply Musounote "Unmatched") is a series of Hack and Slash action games produced and published by Koei, developed by their own Omega Force studio. The games' storylines are loosely based on the Romance of the Three Kingdoms, which covers one of the most turbulent eras of ancient Chinese history (and the basis for Koei's popular series of hard strategy games of the same name).

The games epitomize the Hack and Slash genre, although many of them have special levels and "modes" of gameplay, which allow single and multi-player duels between characters, as well as special "Challenge Modes", which allow the player to select a character and have them perform feats of strength and skill (although most of these are just an extra excuse to mash buttons). The gameplay follows a simple format: allow the player to choose a character, then plop them onto a large battlefield facing waves of enemies. The player then uses button combos and special techniques to decimate armies of Mooks in the most stylish ways possible as they complete mission objectives to turn the tide of the battle in their favor. There's also the occasional titular Musou attacks, which the player can perform after having killed enough enemies or collected enough restorative items. The Musou attack is an automated and cinematic attack sequence, that effectively function as screen-nukers. All of the games have some form or variant of the Musou attack present, though different games may call it a different term.

The games feature a colorful cast of characters, most of whom are part of the storyline's three main warring factions, the Kingdoms of Wei, Wu, and Shu. There are also a few other characters thrown in, including the unsavory usurper Dong Zhuo and his Evil Minion Lü Bu, the greatest badass in all of Ancient China.

The Dynasty Warriors formula has also expanded into other settings, as well as spawned a plethora of spin-off games that apply Warriors-style gameplay to adaptations of and crossovers with other popular franchises:

New releases in this franchise are... frequent, and charges of Capcom Sequel Stagnation are often levied by reviewers.

A film adaptation of the games was released in mainland China on April 30, 2021. It was streamed internationally on July 1, 2021 via Netflix. The trailer can be seen here.

Given the games' large cast, here is a character sheet to learn more about them.

Compare and contrast Dynasty Wars, which this franchise is more or less a remake of.