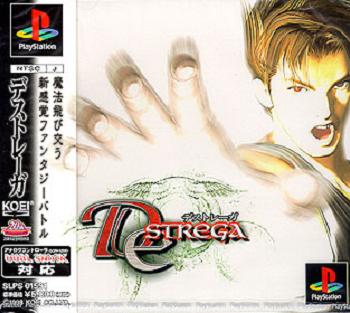 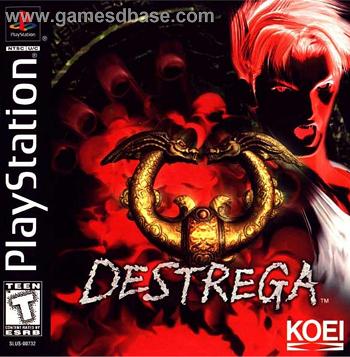 , and the European one note 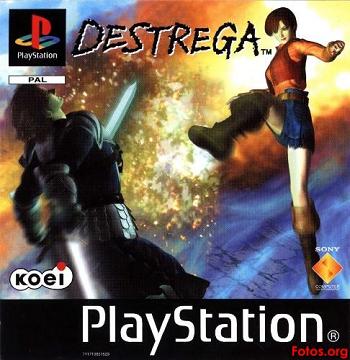 Destrega, spelled as DeSTREGA in its original Japanese release, is an obscure 1998 fighter by Koei, the same company behind the much more known Dynasty Warriors franchise. Like DW, Destrega has a fantasy setting.

The gameplay is essentially an item-less, Limit Break-less version of Power Stone, with a twist: the characters resort to hand-to-hand combat whenever close to each other, and switch their moveset to magic-based projectile attacks as soon as they start to keep a mutual distance. The arenas allow players to roam just as much as they do in Capcom's Power Stone, with the long-range attacks allowing a lot of strategy (although a match can last just 15 seconds at times). The controls are rather basic: while the X button is the one needed for jumping, the Square, Triangle and Circle buttons are used for delivering different attacks, that may be either punches or kicks during melee combat, or a wide array of magical projectiles during longer-ranged fights. Each character's lifebar has a stamina gauge under it, and each attack button empties a third of it: while melee attacks take little more than a second to refill, magical shots take much, much longer. Additionally, up to three attacks (due to the aforementioned stamina) can be chained in a combo, with varied button combinations (such as Square, Triangle and then Circle, for example) usually resulting in the strongest attacks (that often take out up to half a fighter's health). As for the shoulder buttons (all buttons can be mapped, by the way), L1 is used for guarding and R1 is used for dashing.

As for the plot, it's a cross between a character-driven story mode and your typical JRPG plot. There's a Doomed Hometown, an evil empire to take down, a resistance to join, most of the dirty work being carried out by the villain's trusty minion, and so forth. But, aside from the fact that the story mode is shared between a few of the heroes (instead of each one getting a story mode of his or her own), not much about it stands out aside from the fact it provides a narrative context for each fighter, and given the lack of unlockable or secret characters (aside from Dynasty Warriors-inspired alternate skins), it hardly affects the metagame at all.

Magic users are split between Strega, people who have natural access to magic, and Relic wielders, who can use magic thanks to the artifacts of the very same name. In addition to the twelve playable characters described in the character sheet, the story mode features a CPU-only fighter named Relics (Relic in the japanese version), who represent any soldier in Zauber's army fighting with the relics' aid; the more notable Relic users have their own character slots (such as Milena and Fahlma, for example). The story mode takes place eleven years after a Great Offscreen War, in which the conflict between Strega and Relic-enhanced people decimated the population of the game's setting: the empire of Ipsen.

The game was re-released on the PlayStation Network on February 15, 2011, and it can of course be found on eBay as well. You can also, as always, find some gameplay videos on YouTube.