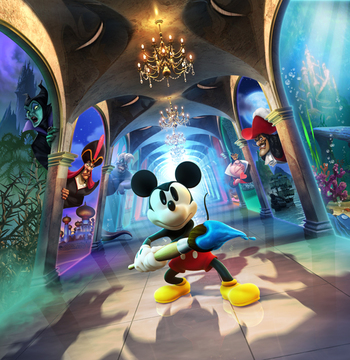 A companion game to Epic Mickey 2: The Power of Two on the Nintendo 3DS developed by Dreamrift, who created Henry Hatsworth in the Puzzling Adventure and Monster Tale. The game is also a successor to Castle of Illusion for the Sega Genesis.

Mizrabel, the witch from Castle of Illusion, arrives in Wasteland along with the titular castle, and finds that she hates her situation. Oswald the Lucky Rabbit contacts Mickey Mouse via television about the castle's presence, and that he saw Minnie Mouse inside the structure. The two go to the castle and find that many Disney characters have been entrapped there as well; with that knowledge they set up a fortress within the castle, and embark on an adventure to save the other characters, break through Mizrabel's illusions and minions, and confront the witch herself.

The game is a traditional platformer, set to mimic its predecessor from the Genesis, while also using the Paint and Thinner from the main series in which it is set. It gets modest feedback at the very least, with critics praising its visuals and good platforming challenge, but criticizing it for its short length, and large amounts of backtracking.