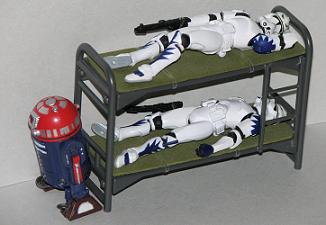 Sleeping with the armor is uncomfortable. But sleeping with the guns makes it necessary!
"Seriously, how do you go to the bathroom in that?"
— Conduit 2, in the Heavy Armor loadout upgrade description
Advertisement:

In fiction, armor is often presented as a piece of everyday attire to be worn wherever you go, like a sweater. This is notoriously common in RPGs, with characters wearing the same armor continuously for weeks. Often characters even sleep in full battle gear. Some RPGs downplay this by having a character in just a breastplate, possibly with shoulder pauldrons and some other odd pieces. Still pretty uncomfortable pajamas.

In Real Life, while historical armor was not as unreasonably heavy or inflexible as in popular myth, wearing it for extended periods was far from comfortable. It took time (and in many cases, assistance) to don and remove, and one's range of motion would be restricted to some degree depending on the exact construction. It could be noisy, what with the clattering of plates and jingling of mail. The weight would tax one's endurance and make one's neck and shoulders hurt after a long day. It could get very hot and sweaty, especially when incorporating a helmet and/or significant padding. Meanwhile, metal parts would become uncomfortably hot or cold to the touch depending on whether you were under scorching sun or in freezing temperatures. Rust was a constant threat to iron or steel armor in the days before stainless steel, so it had to be regularly polished. If you did that right, then protective oil from your greasy mail haubergon would tend to stain you and your clothes. Leather or textile components—including the arming clothes underneath—could soak up sweat or water and begin to stink. In battle, it could become extremely unhygienic: in addition to sweat, people bled inside their armor, and possibly relieved themselves, both because you can't take bathroom breaks in the midst of battle and because sudden terror can *ahem* loosen the bowels. Armor could be deformed or pierced by a mace, axe, polearm, or hammer, causing serious injuries for the wearer. In that case the affected pieces would have to be stripped off the wearer on the way to the surgeon's tent.

Armor could be really expensive, so it had to be treated carefully even when not damaged in a given battle. As the European ironworking industry gradually expanded to meet the increased demands for iron-based armor and weaponrynote  Europe was ridiculously over-iron-ed by world standards even in the 18th century, thanks to technological innovations in smelting and steelmaking. They didn't even have 100 million people, but they had at least a million guns and 10,000 artillery pieces. This is because Europe had been at war with itself practically non-stop for the better part of a millennium, somehow without a single continent-spanning Empire coming into being as a result of it (as per the world norm) standard-issue sets of plate became more common but remained a significant investment. Therefore, after a military campaign, tournament, or training exercise, armor would be removed, cleaned thoroughly, repaired as necessary, and packed away for safekeeping until the next engagement. People hardly ever wore armor when they didn't need to: they wore it when they had to protect themselves (or at least appear in a military parade), and they took it off as soon as they didn't need it. On the rare occasions where they did sleep in it out of dire necessity, you can bet that it wasn't much fun.

This trope doesn't normally apply to certain types of armor that are designed to be less fully protective and easier to wear in civilian life: certain people do actually wear a light-duty Bulletproof Vest all day, and during The Renaissance some people wore doublets made of mail or small plates sewn inside of fabric that acted like low-profile stab-proof vests. The trope proper is about characters relaxing in the kind of equipment that real people wouldn't wear unless they were on military duty, although the aforementioned concealed armors may qualify as downplayed examples if their wearers even sleep in them too.

It may be justified in the case of magical armor; the enchantments may not only increase defense, but also make it more comfortable than normal armor. Another common justification is that that they literally can't take it off, either because it's a Clingy Costume, or because the wearer is a Dark Lord on Life Support and the armor is keeping them alive. Perhaps the most mundane and realistic explanation is that the wearer is camping in hostile territory or being targeted by assassins, so that they dare not remove it for any length of time until the threat is gone. It may also be justified for Powered Armor or a Man in the Machine if they're designed with extended occupancy in mind, incorporating things like climate control and sanitary waste removal. Often a symptom of Limited Wardrobe. 24-Hour Armor combined with the Rule of Funny may result in Boogie Knights. Can overlap with the Ermine Cape Effect and Loafing in Full Costume: warriors in fiction are often shown wearing the full armor of their profession to distinguish them to the audience, even at peaceful events such as banquets or weddings to which real life warriors wear their nicest civilian dress, or at most their fancy dress uniform and sidearm.

If someone spends time in the vicinity of a suit of Animated Armor without knowing its true nature, their working assumption will probably be that it's a person wearing 24-Hour Armor. See Pillow Pistol and Can't Bathe Without a Weapon for people who have their weapons with them even as they sleep or bathe, respectively.