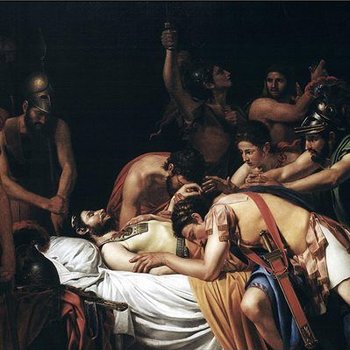 Viriathus is dead.
"Viriathus, who from being a bandit became the leader of all Celtiberians, while feigning to retreat from the enemy cavalry, led them to a land plagued by holes on the ground. There, while he rode following a path he alone knew well, the Romans, unfamiliar to the terrain, sank in the swamp and died."note Note the wrong usage of "Celtiberians" here, as even ancient sources sometimes get things mixed up with names of Spanish tribes. Frontinus probably chose it because Lusitanians were neither exactly Celts nor culturally Iberians yet were influenced by both, even although they weren't part of the specifical peoples chroniclers called Celtiberians.
— Sextus Julius Frontinus, Stratagemas
Advertisement:

A series of wars fought between The Roman Republic and the Lusitanian tribes in the Iberian Peninsula. This episode of history originally came from an attempt by the Roman Republic to conquer Hispania during the Second Punic War in order to cut Hannibal's reinforcement lines towards Italy. However, what at first appeared to be a simple conquest eventually turned into two hundred years of back and forth rebellions and pacifications of the local tribes. Among all of them, the wars against the Lusitanian tribe (155-139 BC) were the best documented, in no small part because the general perception was that the mighty armies of Rome got their asses massively kicked by very inferior forces for years there and only obtained the victory through a vile treason. The wars saw the rise and fall of one of the greatest historical figures in the Iberian Peninsula, the chieftain Viriathus, as well as a new way to wage war, the latrocinium or guerrilla warfare.note Spaniards weren't the first to use guerrilla, but they arguably took it to a whole new level in this and other wars.

Rome had been campaigning in Hispania since the Second Punic War, in which Rome and Carthage had struggled for the control of the peninsula. Spanish tribes often opposed the Romans due to the allegiance of many of them to Hannibal, which actively divided Hispania between those who supported the Roman rule and those who preferred the Carthaginians and/or just wanted to be left alone. After Carthage lost the war, Roman got a hold of Hispania and founded two large provinces in 197 BC, Hispania Ulterior and Hispania Citerior, as part of an effort to turn Hispania into a productive Roman territory. The first direct war between Rome and the Lusitanian tribes happened three years later, when Lucius Aemillius Paulus, the man who had conquered Macedonia for Rome, was sent to manage the Ulterior province. Although suffering rebellions from the ferocious native tribes, Cato the Elder had pacified the lands contained in the provinces, so Paulus and his sucessor Publius Junius Brutus became instead interested in expanding the terrain, most specifically towards the Lusitanian nation. The latter managed to sign a peace treaty favorable to Rome after some bloody battles, so a period of relative peace took place under the Roman rule and its heavy taxes.

War broke out again in 155 BC when a Lusitanian chieftain named Punicus made raids into the lands controlled by the Romans, breaking the treaty and ending the twenty year old peace. Allied with his neighboring Vettones, Punicus obtained important victories against two Roman generals, Lucius Manlius and Calpurnius, and his own death in battle only led to the rise of an even greater leader, his lieutenant Caesarus. The latter not only vanquished the Romans again, but also contributed to the Second Celtiberian War (153 BC) by spreading to all Spanish peoples the notion that Rome could be decisively defeated. Naturally, rebellions started here and there, none more ambitious than the exploits of the southern Lusitanian warlord Caucenus, who acquired ships and launched an invasion against Roman colonies in North Africa. The Roman comeback would come surprisingly from Lucius Mummius, a general formerly humiliated by Caesarus; after giving his legionaries a Training from Hell, Mummius defeated the peninsular Lusitanians and then recovered Africa from Caucenus. With the arrival of praetors Claudius Marcellus and Atilius Serranus, the former drowning the Celtiberian conflict and the latter destroying the Lusitanian capital Oxthraca, peace came to the peninsula.

However, this changed again when Servius Sulpicius Galba and his superior Lucius Licinius Lucullus arrived in 151 with the intention to solidify the pacification and benefit personally from it. Although they initially found success, the Lusitanians inflicted them heavy losses and forced the Romans to retire to their fortified positions in Conistorgis. As both sides were in somewhat of a stalemate and it seemed the time and place for negotiations, Galba and Lucullus came out with a twisted plan to defeat the Lusitanians: they simulated to offer a juicy peace treaty, and when the tribes accepted and gathered unarmed before them as demanded, the Romans attacked treacherously and slaughtered them. This scheme, which was called the Massacre of the Lusitanians and had place in 150 BC, saw thousands of tribesmen killed or sold as slaves in Gaul and effectively ended the conflict. Victorious, Galba resumed his praetor tasks while Lucullus chilled out in Turdetania suffocating a new invasion of Africa, both of them receiving little to no practical comeuppance for their dirty tactics. Although the betrayal had spurred many tribes to act against the Romans, they now lacked strength to do so, and after many failures it seemed resistance was definitely futile. However, a survivor of the Massacre named Viriathus had something to say about it.

In 147 BC, Viriathus and a contingent of Lusitanian raiders were surrounded in Turdetania by the Roman general Caius Vetilius, who claimed to offer them peace. This time, however, Viriathus knew better and convinced his pals to tell the Romans to go to hell. Fate seemed to be over them, but then Viriathus made the miracle: he led his group to perform a daring escape and in turn lured the Romans into a trap in the Barbesula river, which turned the tide and allowed them to mow down the invaders, among them Vetilius himself. Through this shocking victory, Viriathus became a leader among the Lusitanians and inspired new movements of resistance across the entire Iberian Peninsula. He soon followed up with many victories against Rome, and defeated Gaius Plautius, Claudius Unimanus and Gaius Negidius thanks to his knowledge of the terrain and sneaky guerrilla tactics. Only Quintus Fabius Maximus Aemilianus, riding on Rome's full resources thanks to the recent ending of the Third Punic War, managed to force Viriathus to retreat to Baecor in 145, but he failed to arrest the chieftain, and it resulted in most of Aemilianus's forces being lost in ambushes around Pax Iulia.

Viriathus continued scoring basically victory after victory against Rome for a long time, and although he did suffer some setbacks, his army basically strolled through the peninsula inciting tribes to revolt, causing the third and last Celtiberian War in Numantia. Desperate to solve the situation, Aemilianus's son Servilianus amassed a large army complete with Numidian War Elephants and marched against Viriathus in 143 BC, but this effort, although fruitful at first in recapturing several cities, ended up backfiring spectacularly: the Lusitanian leader defeated him soundly in Erisana and forced him to accept a peace treaty in Viriathus's terms, acknowledging Viriathus as dux or leader of his people and declaring Lusitania an independent nation and friend of Rome, nothing less. Naturally, it didn't take much time for Rome to reject such a humiliating treaty and send another general, this time Servilianus's brother Quintus Servilius Caepio, to continue waging war. He was aided by Marcus Popillius Laenas, who was interested in defeating Viriathus in order to weaken the morale of the Celtiberians who still resisted in Numantia.

The end of the war, however, didn't come through a great victory or a glorious conquest, but by treachery. Three Iberian emissaries named Audax, Minurus and Ditalcus, upon returning from a meeting with Caepio, murdered Viriathus in his camp, apparently in the belief they would receive great lands and riches in exchange for their service to Rome. The outcome of this action was bitter to everybody, as instead of receiving any reward, the three were kicked out by Caepio at the voice of "Rome doesn't pay traitors", while the Roman general himself was refused his triumph by the Senate for the conspiracy. Anyway, it effectively ended the Lusitanian resistance, with Viriathus's successor Tautalus being defeated in Saguntum and forced to sign peace with Caepio. The Iberian Peninsula would not be completely pacified until the era of Augustus, but it would never saw again an uprising of the caliber shown by its fallen hero.

The Celtiberian Wars happened more or at the same time as the Lusitanian War. Although they took place in a different part of the Iberian Peninsule and their forces were never strongly associated to Viriathus, it's impossible to understand either conflict without their relationship to each other. As mentioned earlier, Numantia was perhaps the Ur-Example of Undefeatable Little Village, and that was its role for most of the Roman wars in Hispania: while Viriathus and company roamed the peninsula with the goal to sack enemy settlements and destroy their military forces, the Numantines remained pinned inside their terrains, though successfully resisting all attempts of conquest. When Scipio Aemilianus finally broke their resistance by means of a ludicrously severe siege, they were the last great Spanish faction to fall in the war.