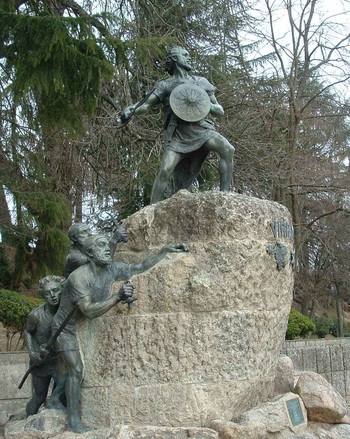 In what is now Portugal south of river Douro, and a portion of Spain, there existed Lusitania, previously owned by Celtic-derived groups and conquered by the Romans when they invaded the Iberian Peninsula. What most people, even most of the modern Portuguese and Spanish, seem to be unaware of, is that there was a native pantheon of gods

. Considering this is perhaps one of the least studied mythologies, there is no surprise that these gods were so little known, and today little is left after centuries of Christian domination (and a period of Islamic domination, and shorter period of the two fighting) of the Iberian Peninsula. What is known, however, is that the Roman religion adopted some of the deities (as was the norm), and that there's enough known to leave something written on TV Tropes.

Like in many mythologies, there are historical texts focusing on it, the most relevant being Macrobius's Saturnalia.