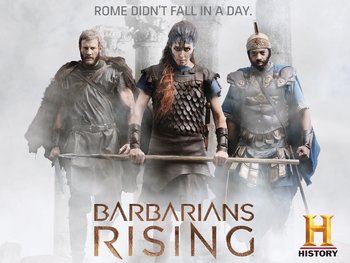 Our Barbarian Heroes.
BARBARIAN:
Not belonging to the great civilizations of Greece and Rome.
Foreign, strange or ignorant.
Outsider.
— the opening splash panel
Advertisement:

was a four-part docudrama miniseries on The History Channel that aired in the summer of 2016.

The series focuses on the struggles between the Roman Empire as it rose and fell and the various indigenous tribal and nomadic peoples on its periphery, the so-called "barbarians", cutting between expert interviews and reenactments of the historical events by a strong cast of TV actors. Primarily told from the barbarians' point of view with Rome serving as The Empire, it follows a succession of leaders across four episodes:

The reenactments bow to the Rule of Drama fairly frequently, though the website for the series usually notes these cases.

This miniseries provides examples of the following tropes: