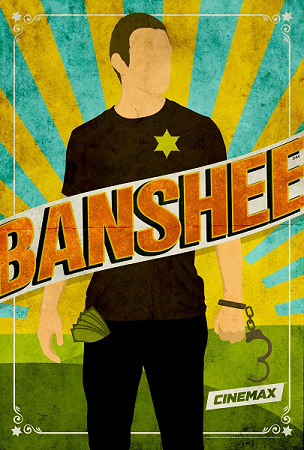 Few people in Banshee are who they seem to be.
"You better brace yourself. Here come the motherf*cking neighbourhood"
Job
Advertisement:

Banshee is a crime action drama on Cinemax which premiered on January 11, 2013. It was created as part of Cinemax’s drive to create more original content. The show is known for some spectacularly violent fight scenes, and its signature crime noir pulp feel.

In the series, Antony Starr stars as a No Name Given master thief who recently got released from prison after a 15-year sentence for stealing $10 million in diamonds. As soon as he is released he goes looking for Anastasia (Ivana Miličević), his lover and accomplice who was able to elude the police and got away with the diamonds. The catch though, is that he and Ana were both working for the Ukrainian mob, so not only did they steal the diamonds from their owners, but they also tried to steal them out from under the nose of the Ukrainian mob boss known only as 'Mr. Rabbit' so they could start their new lives together. His first step is to seek out Job (Hoon Lee), an old accomplice and master hacker, who provided Ana with a new identity all those years ago. Job gives him an address to a place called Banshee, a small town in Pennsylvania's Amish country. There Ana has become Carrie Hopewell, a respected real estate agent, mother of two and the wife of the District Attorney.

On his way to reunite with an unsuspecting Ana/Carrie, he witnesses a botched robbery when two toughs working for the local crime kingpin Kai Proctor (Ulrich Thomsen) try to rob a bar owned by Sugar Bates (Frankie Faison). He is forced to intervene, resulting in the death of Lucas Hood, the soon-to-be new sheriff of Banshee. In a spectacular display of idiocy and ego, he realizes that no one in town has actually seen Hood in person so he assumes Hood's identity and becomes the sheriff of Banshee, hiding out from Mr. Rabbit, and keeping an eye on Ana, and her daughter Deva, who seems to be just old enough to line up with "Hood's" incarceration.

Banshee is not exactly a quiet town though. Between the Neo-nazis in the trailer park, the insulated Amish community, the local Native American tribe and its extremist gang "The Red Bones", and Kai Proctor's criminal empire, "Lucas Hood" has his hands full right from the start.

And now unfortunately, Mr. Rabbit's henchmen are now looking for him and Ana and all hell will break loose if they find out where they are.

The series was well known for its well-choreographed fight scenes and intense cinematic narrative structure. It mixed some very emotional and complex storylines with a lot of violence, sex, and sass. It won a Creative Arts Emmy award in 2013 for Outstanding Special Visual Effects.

The promotional materials for the series included a short webcomic

that gave us a glimpse at the background of the various characters and the events that occurred during the 15 years that the protagonist was in prison.