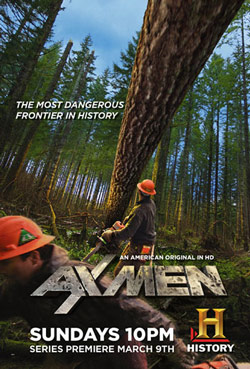 A Reality TV show airing in The History Channel, starting in 2008. Tells the story of several different logging crews struggling to fell trees and ship them off to sawmills and other buyers. Originally set in Washington and Oregon, it has since expanded into other parts of North America, including Alaska, Montana, Southwestern Canada, and the swamps and rivers of Florida and Louisiana.

It quickly fell into Docusoap territory. The series went on hiatus in 2016 after nine seasons, but a tenth premiered in July 2019.

Tropes featured on this series: