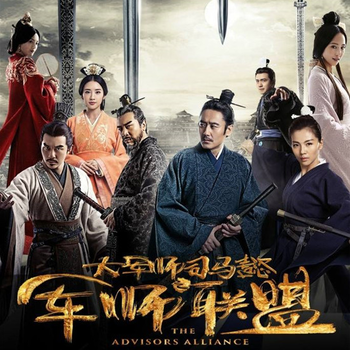 The Advisor's Alliance (Original title "大軍師司馬懿之軍師聯盟", or The Great Military Strategist Sima Yi: The Military Strategists' Alliance) is a Chinese television series made in 2017 focusing on the life of Wei Statesman Sima Yi during the Three Kingdoms era of China.

The series is divided into two parts, with part one focusing on his early career under the warlord Cao Cao and his role in assisting Cao Pi in the power struggle with his brother, Cao Zhi, to succeed Cao Cao.

The second part begins somewhere in the middle or towards end of Cao Pi's reign, and focuses on his contributions to the state of Wei following the total dissolution of the Han dynasty. In this part he takes a more active role in Wei by commanding the armies against rival states Wu and Shu, eventually taking on the role of regent under the third Wei emperor.

of the series can be found entirely on YouTube, though the quality of the official English subs leave much to be desired and part two only has subtitles up to the fifteenth episode.

The Advisor's Alliance contains examples of: