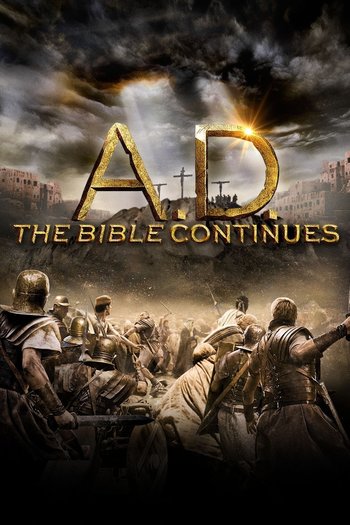 AD: The Bible Continues is an NBC miniseries recounting the birth of Christianity, based on parts of The Bible, which began airing in 2015. It begins with Jesus's death and resurrection as told in The Four Gospels and follows with the Acts of the Apostles.
Advertisement:

It is produced by Mark Burnett and Roma Downey, the same people behind the 2013 The Bible miniseries on The History Channel. Despite the subtitle, it's more of a Spiritual Successor than a straight Sequel Series due to having a completely different cast and including content already covered in the previous series.

The series was cancelled after only one season, but Mark Burnett and Roma Downey have stated plans to revive the series on a new online channel sometime in late 2016 or early 2017

. That seems to have descended into development hell. In any case, the series is currently on Netflix under the title AD: Kingdom and Empire.