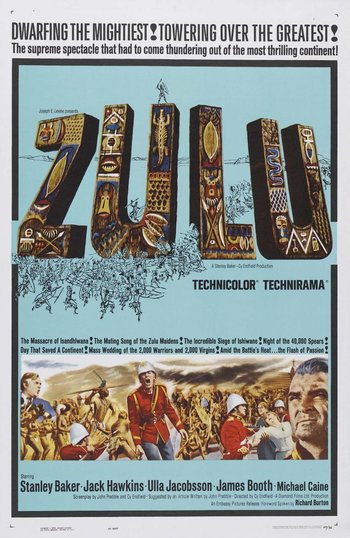 Private Cole: Why does it have to be us? Why us?
Colour Sergeant Bourne: Because we're here, lad. No one else. Just us.
Advertisement:

Based on true events, the film is the story of a Last Stand that the defenders managed to win. The Battle of Rorke's Drift was the result of the Battle of Isandlwana, at which the British expeditionary force of 2000 sent to crush the Zulus had been destroyed through a combination of skilled Zulu leadership of fearless legions of warriors and the incompetence of British commanders. 139 British soldiers in a farmstead, assigned there to protect the wounded (who numbered about one third of the 139) held out against 4-5,000 Zulus for 12 hours. The battle is held to this day as one of the very best defences in all history. Eleven of the soldiers were awarded the Victoria Cross (the highest possible decoration for bravery), the highest number of this medal ever awarded for a single action.

It was followed fifteen years later by a prequel, Zulu Dawn, about the disastrous Battle of Isandlwana that took place earlier the same day. The film was released on the centenary of the battle. It was written by Cy Endfield and starred Burt Lancaster, Peter O'Toole, and Bob Hoskins, and is generally regarded as being better history but the inferior film. It is also much more openly critical of the Anglo-Zulu War, emphasising the fact that the British instigated the war in order to seize Zululand.

While this never happened historically, the Zulus of the film give the defenders of Rorke's Drift a final salute before leaving.

While this never happened historically, the Zulus of the film give the defenders of Rorke's Drift a final salute before leaving.