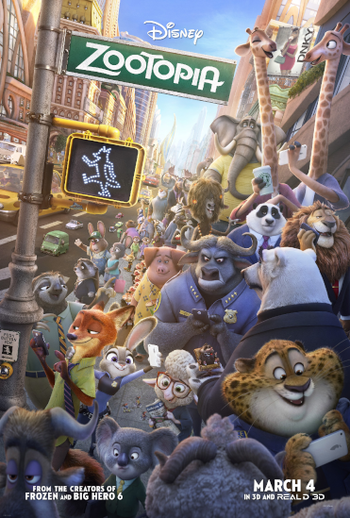 Welcome to the Urban Jungle.
"The great city of Zootopia, where our ancestors first joined together in peace, and declared that anyone can be anything!"
— Judy Hopps
Advertisement:

Zootopianote Also known in some countries as Zootropolis or Zootropolis: Animal City, Zoomania in Germany, Zootopie in France, Zwierzogród in Poland, Zveropolis in Russia and Ukraine, or Dòngwù Fāng Chéngshì ("Crazy Animal City") in China is the 55th film in the Disney Animated Canon, set in a World of Funny Animals.

Judy Hopps is an idealistic, cheery and optimistic young bunny who's left home to be a police officer in the big city of Zootopia. There, she encounters Nick Wilde, a fast-talking fox Con Artist whom she manages to blackmail into helping her solve a missing persons case. Soon, however, the two become involved in a conspiracy that threatens all of Zootopia, which forces them to overcome their differences and ultimately become friends.

The film was released in America on March 4, 2016 (it had an earlier release in Europe and Asia), and is the third Disney Animated Feature to use exclusively anthropomorphic animal characters after 1973's Robin Hood (1973) and 2005's Chicken Little (outside of the 40s package films, at least). It is the third Disney Animated Canon film to win the Academy Award for Best Animated Feature.

and the third trailer here

The film's junior novelization was released on January 19, 2016 in both print and eBook formats, along with an essential guide book and several other tie-in products. A read-along with a CD featuring character voices was also released in early February. In early August, a Hidden Object Game called Zootopia: Crime Files was released for iOS, Android and Windows 10.

that Zootopia+, a comic Animated Anthology series focusing on the film's secondary characters, would air on Disney+ in 2022. A teaser poster

open/close all folders
Tropes A to E
Tropes F to K
Tropes L to P
Tropes R to Z
Tropes Related to Trailers
"I won't give up, no I won't give in
Till I reach the end
And then I'll start again
No I won't leave
I wanna try everything
I wanna try even though I could fail..."
Feedback

The teaser trailer for Zootopia.

Example of:
World of Funny Animals

The teaser trailer for Zootopia.