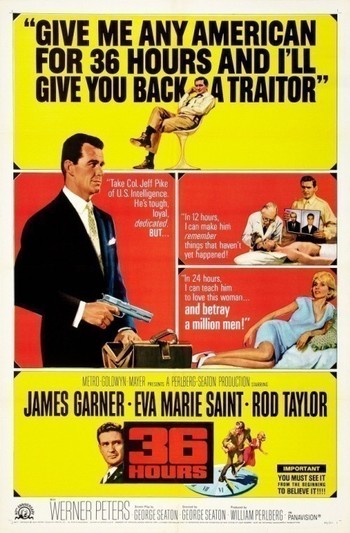 36 Hours is a 1965 World War II thriller film directed by George Seaton and starring James Garner, Rod Taylor, and Eva Marie Saint. It was loosely adapted from "Beware of the Dog", a short story by Roald Dahl.

Just prior to D-Day, the Germans drug and capture Major Jefferson Pike (Garner), a U.S. intelligence officer sent on a mission to Lisbon. They know that he's been briefed on the planned time and place of the invasion. How to make him talk freely?

When Pike awakens, he is told that he has lost all memory of the last six years. That's right, Major, it's 1950. Yes, of course the Allies won the war back in 1944. You are in a U.S. military hospital in Occupied Germany where we're treating your most recent bout of amnesia. Now, as part of your therapy, tell us the last thing you remember...

"Give me any American for 36 hours and I'll give you back a troper":