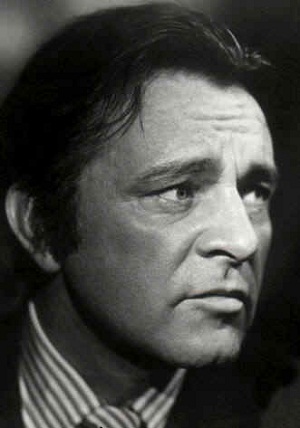 "I'm a reader, you know. I was corrupted by Faust. And William Shakespeare. And Marcel Proust. And Ernest Hemingway. But mostly I was corrupted by Dylan Thomas. Most people see me as a rake, womaniser, boozer and purchaser of large baubles. I'm all those things depending on the prism and the light. But mostly I'm a reader. Give me Agatha Christie for an hour and I'm happy as a clam. The house in Celigny some day will cave in under its own weight from the books. I hope I'm there when it does. One hundred and six years old. Investigating the newest thriller from John le Carré or a new play from Tennessee Williams."
— Richard Burton
Advertisement:

Richard Burton CBE (born Richard Walter Jenkins JR.; 10 November 1925 – 5 August 1984) was a Welsh actor. He was nominated for seven Academy Awards without ever winning (His old drinking buddy Peter O'Toole takes the gold with eight nominations). On stage, he played Arthur in the original production of Camelot.

Burton was also famous for his marriage to Elizabeth Taylor. They met on the set of Cleopatra and engaged in an affair, which resulted him in leaving his first wife Sybil Williams, for Taylor. They married in 1964, divorced in 1974, remarried in 1975, and divorced again in 1976. After his marriage to Taylor ended twice, he later married twice more, to Suzy Hunt (1976-1982) and Sally Hay (1983-1984).

His daughter Kate Burton is also an actress.

No relation with Tim Burton.

In addition to his stage and screen roles, he's also known for providing the voice for The Journalist in Jeff Wayne's musical version of The War of the Worlds.