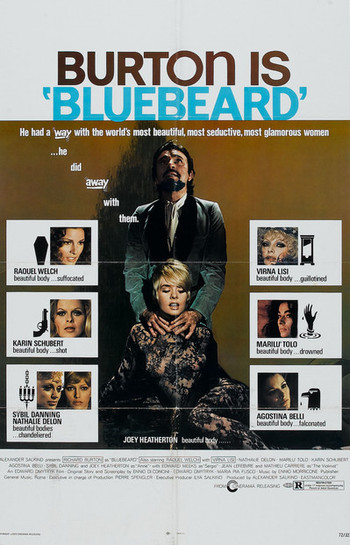 Bluebeard is a 1972 film directed by Edward Dmytryk. It stars Richard Burton and Joey Heatherton. Its basic premise comes from the French folktale of the same name, but with noticeable alterations.

Set in Austria in the 1930s, Baron Kurt von Sepper (Burton) is a World War I pilot with a reputation as a "ladykiller" and a unnaturally blue-tinged beard, which gives him the sobriquet "Bluebeard". He is honoured as a hero by the Austrian public, but the Baron holds a terrible secret that is discovered by his new wife Anne (Heatherton): A vault in his castle that's filled with the frozen bodies of several beautiful women. When confronted with this, Bluebeard explains to Anne that he had six previous wives, and after a while, he murdered each one of them. In order to avoid being Bluebeard's next frozen bride, Anne must find a way to outwit her murderous husband.