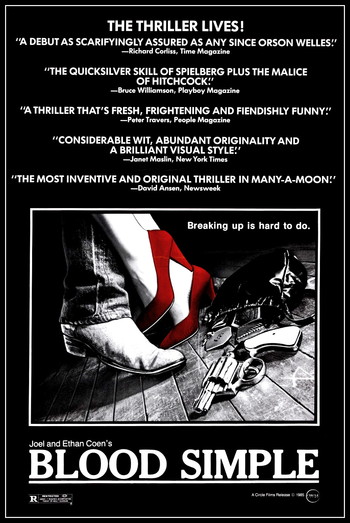 "The world is full o' complainers. An' the fact is, nothin' comes with a guarantee. Now I don't care if you're the pope of Rome, president of the United States or Man of the Year; somethin' can all go wrong. Now go on ahead, y'know, complain, tell your problems to your neighbor, ask for help, 'n watch him fly. Now, in Russia, they got it mapped out so that everyone pulls for everyone else. That's the theory, anyway. But what I know about is Texas, an' down here... you're on your own."
Advertisement:

Blood Simple is 1984 American neo-noir crime thriller about a Texas bar owner who is certain that his wife is cheating on him and hires a private detective to spy on her. But that's only the beginning.

Written and directed by The Coen Brothers, this was their debut film and it features many of their stylistic trademarks. The cast includes Frances McDormand, John Getz, Dan Hedaya, and M. Emmet Walsh.