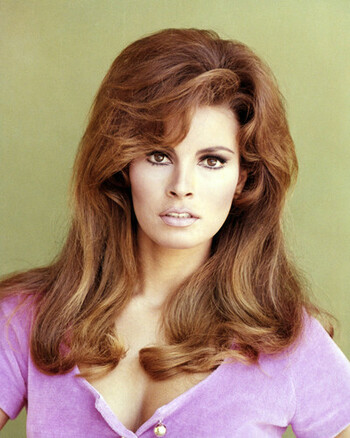 "The whole sex-symbol thing is part of what I do as an actress. It's a kind of character I play. It's part of me, but not the whole me."
Advertisement:

She became an overnight sensation for her role in One Million Years B.C. (1966). Images of her in the Fur Bikini that she wore in that film became best-selling posters that turned her into a celebrity sex symbol and an icon of The '60s and The '70s. She later starred in notable films including Bedazzled (1967) and Myra Breckinridge (1970). She won a Golden Globe Award for Best Actress for her performance in The Three Musketeers (1973).

Fun fact: She's a first cousin of Lidia Gueiler Tejada, who became Bolivia's first female president from 1979 to 1980, and they met afterwards.