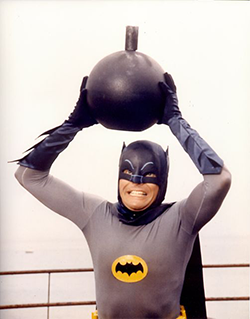 Holy Cartoon Bomb, Batman!
"Batman (1966) became Camp. In those days, Camp was a fairly serious intellectual enterprise. When kids see it, they take it literally, but when adults see it, they realize it's comedic."
— Denny O'Neil, Superheroes: A Never-Ending Battle
Advertisement:

Derives from the French gay community's slang term se camper, meaning "to pose in an exaggerated fashion." The term "Camp" morphed into referring to a sensibility that revels in artifice, stylization, theatricality, irony, playfulness, and exaggeration rather than content, as Susan Sontag famously defined the term in her short essay "Notes on Camp".

Don't expect it to take itself the least bit seriously.

The main debates concerning the term are twofold:

See also Camp Gay, Macho Camp, Camp Straight, and Campy Combat. Compare So Bad, It's Good, Stylistic Suck and Narm Charm. Related to Large Ham and World of Ham. Not to be confused with the movie Camp (2003), nor has anything to do with a Camping Episode.