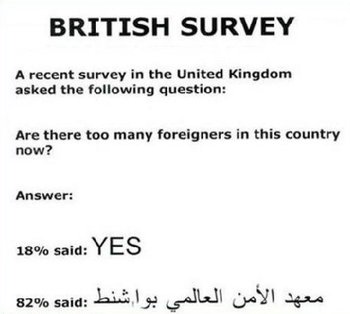 As long as we count "fuck off" to mean yes.
"It is clear that humour is far superior to humor."
— Oscar Wilde
Advertisement:

Describe British Humour here. Good, 'cause I can't explain it.

The first rule of British humour is to mock the monarchy and/or establishment but in a loving and reverent way. Generally known as satire, there's at least a little bit of truth there. Nobody wants to be a posh twat, do they?

The second rule of British humour is to switch to Sarcasm Mode at every available opportunity. To expand: humour is the default setting of British conversation unless it absolutely needs to be serious or they're with unfamiliar people.

British humour is often said to go over the heads of everyone else in the world, likely because it's far too sophisticated and pretentious for anybody to really understand, but the British being British all individually decided to pretend like they do, coming up with smart and sarcastic sounding nonsense to keep the game up all these years.

Yeah, that's probably why nobody else really gets it. The Brits are just a bunch of sarcastic arseholes, really.

The ability to be so flippant about the quality of life — absurdities of reality, existential dread, self-loathing, and how morbidly crap the UK is are generally the largest targets of British humour — probably stems from the fact that, for a lot of history, it wasn't actually bad at all. With stability in real life, you can very well take the piss out of your conditions and it doesn't really wound the soul. Then, when real life actually turned to shit come the highly unprecedented political divisions suddenly appearing and climate change or something fucking the place up, satirical humour became a refuge to well in despair, but with a smile.

What probably makes it really hard to master is the fact that it is a reactive kind of comedy stemming from broad self-referential humour, and with an audience-dependent choice to be made regarding delivery. A completely accurate and innocuous statement delivered very seriously in appropriate circumstances can be quintessential British humour if it's all in place. One thing that makes this possible is perhaps the nigh-National consciousness and intimate knowledge of items and issues, and a shared sense of humour, reliant on the British society being so small and unique, and the general concerns of the nation amounting to high interest in general education and politics. And a well-timed "piss off" will be both a Precision F-Strike and quite funny.

The most confusing part about British humour (besides all of it) has to be the fact that it isn't comedy. Comedy and humour are quite different, and British humour is more amusing quips in regular conversation than a joke shop. You don't laugh (and have you ever seen a British person laugh and look respectable at the same time? It's impossible, so they developed a humour that prevents the shame of guffaw), except a little. Since a lot of the structures and ideas don't translate well, either, this really means that there are zero indications of humour for foreigners, who usually think their British company is batting non-sequiturs between each other for no good reason. Whatever, loser. People not getting it has become funny itself.

British humour can be said to exploit a version of Poe's Law in a way: you've got to be in on the practice to really understand if someone is being serious or being funny. It's like a really big In-Joke.

Common elements of British humour that have tropes. Just don't try too hard or you come off as only slightly less pathetic than if you'd actually done it well:

And, because they've got to be special, someone did an actual study

proving that the understanding of, and inclination towards, negative humour (biting statements, teasing, self-deprecation) is not only in the genes of British people but also not in anyone else's. Sorry, I've got to, my mum gave me these genes.

Brit 1: Guess we should Talk About the Weather.
Brit 2: It's lovely today, isn't it.
(thunderstorm destroys the bridge)
Brit 2: Oh, well, looks like I might be a bit late for Corrie tonight.
Brit 1: Yes, only my great aunt Vera and her arthritic cat knows how much insurance'll go up at a time like this.
Brit 2: Tea?
GDLA Interviewer: Did you read Paper Towns before the movie? [para]
Cara Delevingne: No, I never read the book or the script, I just winged it.
Brit 1: How was your holiday?
Brit 2: Shite. Kids' entertainment was free and a pint was only 1 euro. Sun every day, too.
Brit 1: Ghastly, must be glad to be back at work.
Brit 2: You have no idea how much I love sucking our awful boss' balls.
Ed Balls: Ed Balls.

Sample of works that are based in British humour:

Not massively related to the Brit Com, the Awful British Sex Comedy, or British Comedians, but these can all contain British humour.

Oh, and taking the piss out of America. Don't worry, it grows on you.