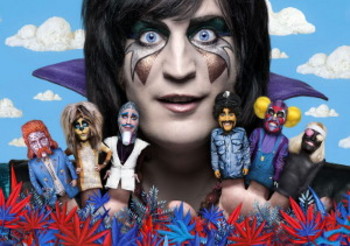 The latest project of British actor and comedian Noel Fielding, better known as one half of The Mighty Boosh, described by Channel 4 as "a psychedelic character based comedy show half-filmed and half-animated", although really, that description barely does it justice. Released in 2012.

Each episode involves Noel (playing an exaggerated version of himself), his friend Dolly, his anteater butler Smooth and his cleaner Andy Warhol having various bizarre adventures in Noel's jungle home. Added to this are numerous sketches, cartoons and musical interludes, often entirely unrelated to the main plot, involving such characters as Sergeant Raymond Boombox (an incompetent New York cop with a talking knife-wound on his left arm) Roy Circles (an anthropomorphic chocolate biscuit with disturbing racist tendencies) and Noel's landlord Secret Peter (a brain-damaged purple blob with a passion for tennis).

The show returned for a second series under the name Luxury Comedy 2: Tales from Painted Hawaii - in July 2014. Similar to how each series of the Boosh takes place in a different setting, we now see Noel and chums run Luxury Coffee, a café on a top of a volcano in Hawaii, and is intended by Fielding, both in the show and in interviews, to be more sitcom-based as a reaction to the mixed response of the first series. Don't worry, it's still pretty bonkers, though.