Series / They Think It's All Over 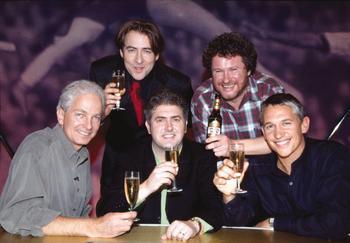 The regulars from 1998-2003. Left to right: David Gower, Jonathan Ross, Nick Hancock, Rory McGrath, Gary Lineker.
"This isn't like A Question of Sport, is it?"
—Stephen Hendry on the 1980s special.
Advertisement:

They Think It's All Over was a sport-themed Panel Show which began airing on BBC Radio 5 in 1992. It was chaired by sport broadcaster Des Lynam and featured two teams of two panellists each, captained by comedians Rory Bremner and Rory McGrath, with guests from the world of sport. After two series and a Christmas Episode in 1992 and 1993, the format made the jump to television in 1995, airing on BBC1 for 155 episodes across nineteen series and several specials.

The TV series was initially presented by comedian and Room 101 presenter Nick Hancock, and featured two teams of three panellists captained by former England cricketer David Gower (who had made several appearances on the radio version) and former England footballer Gary Lineker, with regular spots taken by comedians Lee Hurst on Gower's team and Rory McGrath on Lineker's. The third members of each team were generally either athletes, commentators, or comedians, although occasionally politicians (such as Alastair Campbell or Jeffrey Archer) or broadcasters in other areas (such as Chris Tarrant or Richard Hammond) would appear. Hurst left the series in 1998 to concentrate on running his comedy club in Bethnal Green, and after two series of rotating guest comedians, his place was permanently taken by radio and TV presenter Jonathan Ross.

The series was to sport what Have I Got News for You is to current events and Never Mind the Buzzcocks was to pop music: ostensibly a quiz about the people and events in sport, but really a showcase for the comedic talents of the regulars and an excuse to poke fun at the world of sport. Each episode featured between four and six rounds, some of the more frequently played of which were:

Gower and Lineker both left after fifteen series in May 2003 to focus on their careers as commentators/pundits, and were replaced by cricketer Phil Tufnell and goalkeeper David Seaman. Seaman only stayed for two series before being replaced by his former Arsenal teammate Ian Wright, while Tufnell left after another series to focus on his broadcasting career and was replaced by German tennis star Boris Becker. Hancock was replaced as presenter by standup comic Lee Mack at the same time Tufnell left, and finally Ross left after another series and was replaced for two specials by comedian Sean Lock. This frantic revolving door of personnel and the gradual shift in tone of A Question of Sport (of which They Think It's All Over was conceived as a more irreverent version) from serious game show to light-hearted comedy contributed to the series' cancellation in 2006.

There was a one-off revival for Comic Relief in 2011 as part of David Walliams' 24 Hour Panel People with a returning Nick Hancock as chairman and teams captained by broadcasters Dave Berry and Richard Bacon; Berry's teammates included Walliams and a returning Lee Hurst, while Bacon's teammates included former gymnast Gabby Logan and a returning Phil Tufnell. The recording was streamed live as part of the 24 Hour Panel People marathon on the website of cable channel Dave.