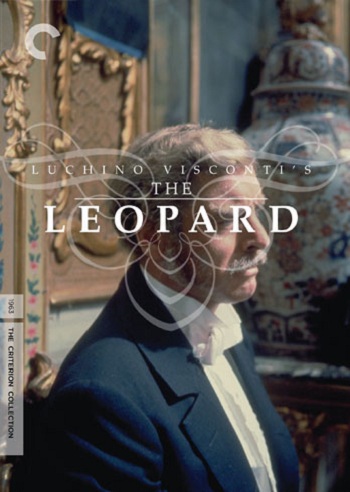 "We were the leopards, the lions, those who take our place will be jackals, hyenas, and the whole lot of us — leopards, lions, jackals and sheep — will continue to think ourselves the salt of the earth."
— Don Fabrizio Corbera, Prince of Salina
Advertisement:

The Leopard (Il Gattopardo) is a 1963 film by Luchino Visconti, adapted from the book of the same name by Giuseppe Tomasi de Lampedusa, with a soundtrack by Nino Rota. It takes place in Western Sicily during the Wars of Italian Independence.

Prince Don Fabrizio Corbera of Salina (Burt Lancaster) is The Patriarch of a powerful Sicilian aristocratic family. On the eve of Giuseppe Garibaldi's landing in Sicily, Don Fabrizio contemplates the future of his family and way of life in a post-Risorgimento Italy where the middle classes will hold power. Being highly realistic, he decides to go with the times. He's highly pleased that his more ruthless nephew Tancredi Falconeri (Alain Delon) has joined Garibaldi's Redshirts. When the fighting thins out, he moves his family to the country estate of Donnafugata in the hope of marrying his nephew to Angelica (Claudia Cardinale), the daughter of the Nouveau Riche Don Calogero.

The film won the Palme d'Or at Cannes in 1963 and was a huge box-office success in Europe. It is generally considered one of Italy's greatest films and one of the greatest historical films ever made, and Luchino Visconti's best known work. It would go on to influence several film-makers around the world, including Sydney Pollacknote He actually worked on the American Re-Cut of the film and deeply regreted being asked to butcher a masterpiece, Martin Scorsese and Francis Ford Coppola (whose The Godfather films contain several homages to Visconti's film).

In terms of style, it combines the Hollywood Epic Movie (exotic locations, big stars, battle scenes) with the European art film. It is especially famous for its jaw-dropping use of colour, location shooting and the famous hour long ball scene of the finale. Burt Lancaster, cast against type, always considered the film his favorite of all his roles and the one he was proudest of.