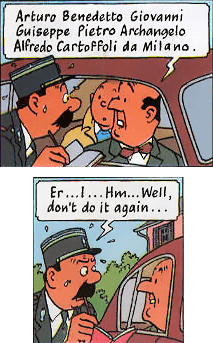 A.k.a. Incredibly Long Name to Have to Try and Say.

In the broadest sense, whenever a character has more than the usual (in the Anglosphere) first, middle, and last name, they are in possession of this trope. Also included are people who have the right number of names, but one or more of them is absurdly long, for example Ulla Inga Hansen-Bensen-Janson-Tallen-Hallen-Svaden-Swanson in the remake of The Producers. (This is actually just her first name. They "don't have the time" to hear her last name.)

Can be used simply as a humor device, getting cheap laughs out of an absurd name; played to the extreme this would be a type of Overly-Long Gag, being so long as to be tedious and thus deriving its humor; or it can be a non-joke to the audience because characters with strange names are expected in the type of show/book/planet/whatever, but cause the characters involved trouble as they try not to react to, or at least comment on, the oddity of the person's name. And if someone wanted to go after the said person, it would be a nightmare for them to recite their full name and jot it down, which makes murdering a person with a notebook not always a good idea.

If the character is not from around here, it might be an example of As Long as It Sounds Foreign. If there is one normal name when all the others are are ridiculous, or vice versa, it can be Aerith and Bob. In all cases, one of these makes for a good Unpronounceable Alias.

A variation exists with Hispanic characters, for whom having at least four names note more than one given name, plus the surnames of both parents is the norm. For these characters, the long name may be brandished as a funny part of the culture.

Truth in Television: There are too many actual people, places and things with absurdly long names - it's really better if you just go to the other wiki

, where there is a whole article dedicated to this. Doesn't that just simplify everything?

Compare Embarrassing Middle Name, Overly-Long Gag, Some Call Me "Tim", The Unpronounceable, Sesquipedalian Smith, and Try to Fit That on a Business Card. Often results in Fun with Acronyms and its sub-trope Shoehorned Acronym.

Related to Long Title. Contrast One-Letter Name. A Name That Unfolds Like Lotus Blossom will almost always be overly long.

Lola gives Lucy's doll an elaborate name but calls her 'Rose' for short.

Lola gives Lucy's doll an elaborate name but calls her 'Rose' for short.