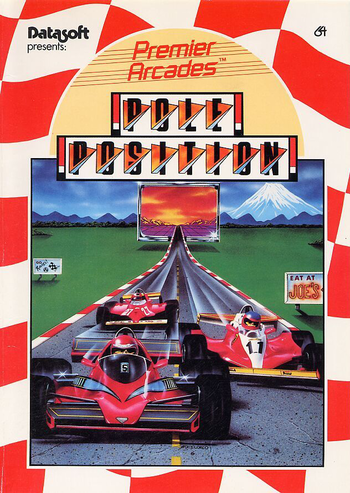 It'll bust your crank, and leave skid marks on your soul!
Prepare to qualify!
Advertisement:

Pole Position is a racing game released by Namco in 1982 (and published by Atari in the United States the same year). Your goal is to drive your Formula One race car around the Fuji Speedway while avoiding crashing into other cars. The game is broken up into two segments: a qualifying round, where you try to complete a lap of the course for positioning and points; and a race segment, where you have to complete four laps around the track before time runs out. Crossing the start/finish line gives you a time bonus.

Pole Position became the most popular arcade game in 1983 due to its realistic-for-the-time graphics, and was one of the pioneers of the pseudo-3D "rear-view racer" format, though Sega's Turbo beat it by one year.note Atari's Night Driver is even older, although in that game, the "car" was simply a decal that was put on the monitor.

A sequel, Pole Position II, was released in 1983. It added somewhat improved graphics and the ability to choose from one of four courses, including the Fuji Circuit from the original game, and the famous Suzuka International Racing Course (by far the hardest of the four). It also adds wheel spin, making the game slightly harder. It was also available in a deluxe sit-down cabinet configuration, using three monitors to give a panoramic view.

The 1984 cartoon of the same name has nothing to do with the games, even though DiC Entertainment did in fact pay Namco to use the name.