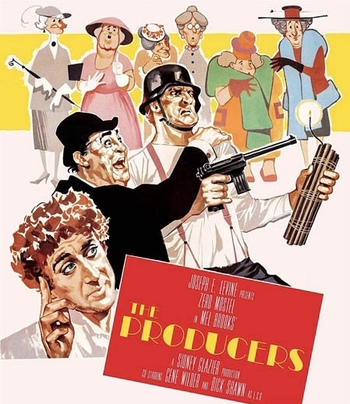 "The cast is great, the script is swell, but this we're tellin' you, sirs
It's just no go, you've got no show without The Producers!"
Advertisement:

The Producers is a 1967 comedy film written and directed by Mel Brooks; it stars Zero Mostel as failed Broadway producer Max Bialystock and Gene Wilder as fearful accountant Leo Bloom. The film, now considered a comedy classic, launched Brooks' long film career; several decades later, he adapted it into a Broadway musical starring Nathan Lane and Matthew Broderick (as Bialystock and Bloom, respectively) which won twelve Tony Awards (the most Tonys a Broadway production has ever received). The show and original film also won two Grammy Awards (Best Long Form Music Video and Best Musical Show Album) and an Academy Award for best screenplay, making this production responsible for six of Mel Brooks' collection of eleven major awards in the entertainment industry. The Broadway adaptation was itself adapted into a film in 2005 (featuring Lane and Broderick in the primary roles), but this adaptation wasn't as well-received as the original film or the Broadway production.

In all versions, the story depicts Bialystock and Bloom meeting for the first time and immediately falling into a get-rich-quick scheme: realizing that the IRS never investigate the financial books of failed plays, they plan to oversell shares in a Broadway production by a wide margin, then deliberately produce a horrific flop which closes in one night, leaving them free to flee the country with the remainder of the massive initial investment.

The two schemers choose as their Broadway bomb Springtime for Hitler, a "love letter" to the German dictator written by unrepentant Nazi Franz Liebkind. In the original film, their chosen director is Roger DeBris, who is wholly untalented and flamboyantly gay, while Hitler is played by Lorenzo St. DuBois ("LSD"), a charismatic but seriously brain-damaged hippie. In the musical, Liebkind is chosen for the role of Hitler, but breaks his leg at the last minute and is replaced by DeBris.

Bialystock and Bloom's plan culminates in a production which the opening night audience finds funny (they think it's satire), and since the play is announced to be a smash success, things only go downhill from there.

open/close all folders
The Original 1967 Version
The Musical and 2005 Version
Thanks for coming to read, our friend!
Sad to tell ya', you've reached the end!
Grab your hat and head for the door!
In case ya' didn't notice, there ain't anymore!
If you like our page, tell everyone but,
If you think it stinks, keep your big mouth shut!
We're glad you came but we have to shout, Adios! Au revoir! Wiedersehen! Tatata!
Good-bye! Get lost!
GET OOOOUUUUUUUUUUT! It's over!