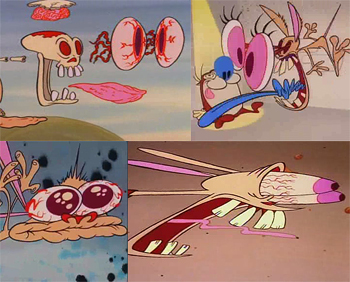 "AAUUUUGGGGHHHHHH!"
— Pretty much anyone who does this
Advertisement:

A variation on The Take. If The Take is reaction, the Wild Take is massive over-overreaction.

For example, say a mouse ran across the kitchen floor. A take would be to jump back, startled. A Spit Take would be to shoot out your coffee dramatically out of your mouth and start shouting. A wild take would be to scream at the top of your lungs with your eyes popped out and duplicated many times and with a giant mouth and jump high enough to leave a you-shaped hole in the roof.

Most characters who engage in this behavior tend to be high-strung at the best of times. Don't ask about the worst of times.

Mostly an Animation Trope, though it can be CGI'd into live-action shows (most often, but not exclusively, those intended for a younger demographic and "live-action cartoons"). See also Eye Pop.

Daffy transforms into a giant eyeball upon seeing the Big Bad Wolf.

Daffy transforms into a giant eyeball upon seeing the Big Bad Wolf.