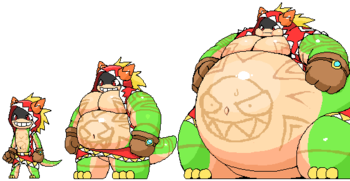 "Finally, I weigh enough to reach the top shelf!"
In Real Life, you have a set adult height (unless you have some sudden growth disorder) and no amount of weight gain, whether from fat or muscle, will increase it (well, gaining some muscle might make you stand up straighter, but that's about it). In fiction, however, especially in animation, getting fat or muscular will increase a character's height. This is done both to exaggerate how big the character has become, as well as making the character easier to draw.
Advertisement:

Heavy Voice might be combined with this. Compare Balloon Belly.