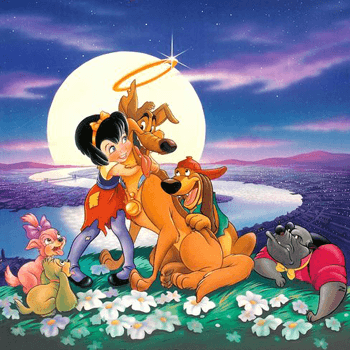 All Dogs Go to Heaven is a Don Bluth film released in 1989, very loosely inspired by the obscure 1943 book by Beth Brown.

The film tells the story of Charlie B. Barkin (voiced by Burt Reynolds), a roguish German shepherd con man "with the heart of a marshmallow." After breaking out of the local dog pound, Charlie confronts his business partner, an unscrupulous gangster named Carface Carruthers (voiced by Vic Tayback in his second-to-last role) to work out an agreement that'll let the two of them split their profits 50/50 so Charlie can start his own business without giving Carface's a bad name. Carface, who got Charlie sent to the pound in the first place and is looking to do away with him permanently, takes him out for a celebration, gets him drunk and murders him via vehicular manslaughter (dog-slaughter?).

Despite showing no real morality in life, Charlie arrives at the Pearly Gates and learns that all dogs go to Heaven because, unlike humans, dogs are naturally loyal and kind. Quickly tiring of paradise and desperate to get his revenge on Carface, Charlie steals back the gold pocket watch which contains his lifeline and returns to Earth. He soon discovers that Carface has been able to keep the casino afloat with a special asset, a young orphan girl named Anne-Marie (voiced by Judith Barsi in her final role) who has the ability to speak to all animals. Along with his friend Itchy (voiced by Dom De Luise), Charlie steals the girl and uses her to bet on horse races, using the money to build his own casino.

Charlie starts to grow attached to the little girl, who desperately wants a family, and undergoes a slow change of heart. Meanwhile, Carface has learned that Charlie is still alive and is plotting to kill him again. Charlie also has to ensure that nothing happens to his watch, as being a fallen angel means he'll be sent to Hell if it stops.

If the movie is remembered for much else, it's the fact that it was released on the same day as (and financially massacred by) Disney's The Little Mermaid. Disney reclaiming their spot as top dog in the animation business after years of being shown up by Bluth's independent features effectively ended their rivalry and Bluth would spend the following decade producing a string of flops until semi-retiring in 2000.

Dogs, meanwhile, went on to have a healthy shelf life, becoming the highest-grossing VHS release of 1990. Seven years later, it received a sequel, All Dogs Go to Heaven 2 (par for the course for every animated film ever during that time), and a TV series adaptation, neither of which Bluth had any involvement with.

This animated film and its related works provide examples of the following tropes:

Alternative Title(s): All Dogs Go To Heaven The Series, An All Dogs Christmas Carol