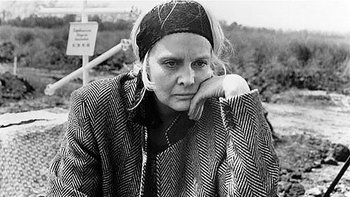 The Asthenic Syndrome is a 1989 Soviet film (made in the Russian language in Odessa, Ukrainian SSR) by Kira Muratova. It was shot after the Perestroika stepped in and the director was allowed to freely make her cinema once more as the previous ban had been lifted.

Its first part is dedicated to a woman who tries to cope with the loss of her husband. Its second part tells about a schoolteacher who suffers of the titular asthenic syndrome. Actually the first, shorter, part of the film is a movie demonstrated to the said schoolteacher. He sleeps in his seat after everyone quits the movie hall after the movie ends.

This is arguably a go-to movie when one thinks about Kira Muratova. Although both her much earlier Brief Encounters (1967) and much later The Tuner (2004) are also respected.