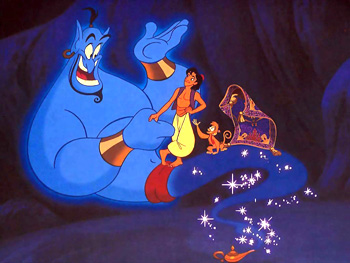 As it turns out, not all genies are by-the-book bureaucrats who are more interested in doing exactly what you say than actually getting you what you want. Nor are they all complete jerks who seem determined to make whatever wish you utter cause suffering regardless of how well you word it. Some genies are just really cool. Maybe you helped them do something and they're giving away wishes as a legitimate reward rather than out of obligation. Maybe you're a good person at heart and the genie just can't bear to screw you over at risk of helping the bad guys. Or maybe the genie is just so nice, so subservient, or both, that they can't even conceive of granting a wish in a way that directly hurts good ol' master.

This is the Benevolent Genie, the generally lesser-used character type of the three. This is because the very existence of such a genie is a major story-breaker if the genie is so powerful they can just magic problems away. One common way of adding conflict is to make the genie so ditzy that their usefulness can end up screwing things up, ultimately providing the wisher Unwanted Assistance, by limiting the number of wishes that can be made, or at least giving the genie some sort of exploitable weakness. In other cases, the source of conflict can come from the wish-maker demanding an impulsive and short-sighted wish with consequences that no amount of benevolence can prevent. Additionally, a Benevolent Genie does not actually have to be good, as long as the wish itself is fulfilled to the spirit of the wish - this does not stop the genie from being a jackass in other ways, and thus another common trope is to have the wish granted at a hefty cost to the wisher.

Note that the attitude of this genie can quickly revert to one of the other two if they're exploited by a character they dislike enough.

Please note that Benevolent Genies are not immune to being used by bad guys, due to being Loyal to the Position. Of course, just because they're forced to do their evil master's bidding, it doesn't mean they have to like it.

More often than not, the ultimate ending for this type of Genie tends to be its master wishing it free. Depending on the work, this sometimes makes the Genie have unlimited power or in other cases makes them normal humans.