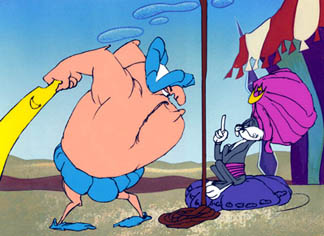 "Ali Baba Bunny" is a 1957 Merrie Melodies short (directed by Chuck Jones) involving Bugs Bunny and Daffy Duck as they wind up inside the cave from "Ali Baba and the Forty Thieves" after taking a Wrong Turn at Albuquerque. Daffy's greed gets the best of him when he sees the cave's treasure, landing him in hot water with the cave's guard, Hassan. Bugs does his best to extricate Daffy from his troubles, despite Daffy's continual backstabbing attempts to seize all the treasure for himself.