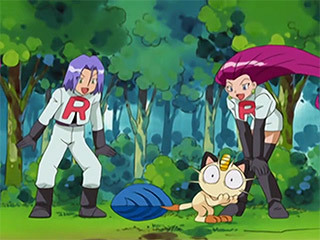 Bivalvia is a class of two-shelled mollusks including clams, oysters, and scallops. Most of these animals are tiny and virtually harmless in Real Life. However, fiction tends to make them more dangerous, by having them snap at people with their shells. Depending on the clam's size, it may either simply bite the victim, or actually "eat" them, trapping them inside its shell.

This portrayal is most likely inspired by the giant clam, Tridacna gigas. Of course, they don't actually eat people, but with their enormous size and scalloped shells giving them a somewhat sinister appearance, it sure looks like they could. As a result, many Clam Traps, if not explicitly called giant clams, will at least be modeled after them.

How anthropomorphized the clams are tends to vary, too. They may be given features such as eyes on their top shell, or a tongue inside their shells; sometimes their eyes are inside their shells as well. They can also range from mindless and neutral to sentient and evil — all that matters is that they bite.

In video games, expect to see them as obstacles — usually Invincible Minor Minions — in Under the Sea levels. They will usually open and close their mouths periodically, with a valuable item in their "mouth", forcing the player to swim in and grab the item before the clam shuts.

Subtrope of Artistic License – Marine Biology. Not to be confused with Bear Trap, a steel, somewhat clam-shaped device used to trap bears and other land animals. Often overlaps with Perplexing Pearl Production, if a bivalve snaps at someone who tries to take its pearl, and Clamshells as Mouths if they are treated as "eating" the victims whom they bite down on. Possibly averted by Palate Propping, although technically bivalves don't have a palate.