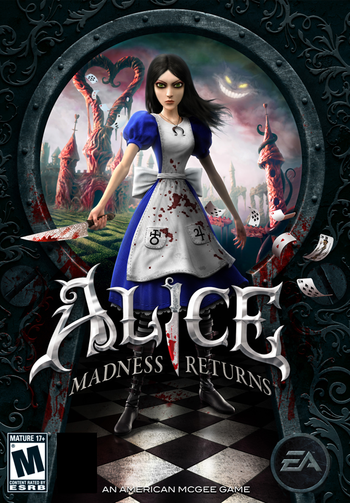 "Is it mad to pray for better hallucinations?"
Advertisement:

Alice: Madness Returns is the sequel to the 2000 video game American McGee's Alice. Once again, you play Alice Liddell, attempting to save Wonderland from a rampaging train and her own subconscious.

One year after the conclusion of the original, Alice is still struggling to recover from the emotional trauma of losing her entire family in a fatal fire. After spending a decade institutionalized in an insane asylum, she is finally released to the care of a psychiatrist, Dr. Bumby, who tries to help her conquer the nightmarish hallucinations that still haunt her. Alice embarks on a mission to root out the true cause of her family's mysterious death by returning to Wonderland, which has only gotten worse. By teaming up with old friends (and foes) and journeying through a variety of expansive locales, Alice must work through her own mind to discover the truth about the accident that killed her family, even if it drives her over the edge into insanity once and for all.

The game was released in June 2011 (more than a decade after the original first came out) and was developed by the same creative team, including American McGee. The game received mixed reviews upon its release.

The game's creator planned a third game and has already written the storyline for it. Due to legal and copyright issues, however, this could not be achieved at that time. A successful Kickstarter

to produce two animated shorts based on the idea was fully funded in August 2013. They were completed in 2015.

Alice finds herself surrounded by demonic enemies from Wonderland in the real world, but they disappear as though they never existed...

Example of:
Through the Eyes of Madness

Alice finds herself surrounded by demonic enemies from Wonderland in the real world, but they disappear as though they never existed...