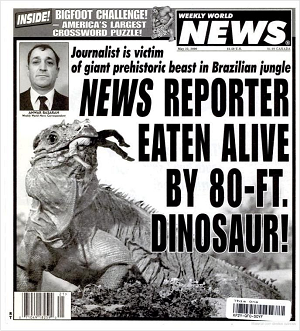 There's no way this is real. That's an iguana, not a dinosaur.
You think that publications like The Sun make everything up. I used to think that, too, before I checked into a story the Sun published a few months ago headlined "GIANT FLYING CAT TERRIFIES STATES." Remember? The article that featured the actual artist's depiction of an enormous cat? Flying? With wings? Well, I did some checking, and you will be interested to learn that every single word in the headline is true except for "GIANT," "FLYING," "TERRIFIES," and "STATES."
— Dave Barry, "Mutant Fleas Terrorize Midwest"
Advertisement:

Sometimes newspapers of a more questionable level of veracity publish news that is clearly bunk, in the case of Alien Abductions, yetis being found and women giving birth to animals. Other times they'll print that which might be true but seems to be kinda loopy and of questionable newsworthiness - toast burned in the likeness of historical figures for example. These stories are of course either complete fabrications in the former case or are just questionable coincidences.

The news industry calls this type of "news" 'Man Bites Dog', a name that seems rather more mundane than some of these stories actually tend to be. This sort of publication shows up in fiction from time to time too, especially ones which heavily feature either journalists or well known people (within their universe) frequently or where weird happenings really do occur and these stories are true - or sometimes these stories are bizarre even for the setting.

Not necessarily related to Doomy Dooms of Doom, although it might overlap with If It Bleeds, It Leads or You Can Panic Now. A Clickbait Gag is sometimes a comedic depiction of online examples.