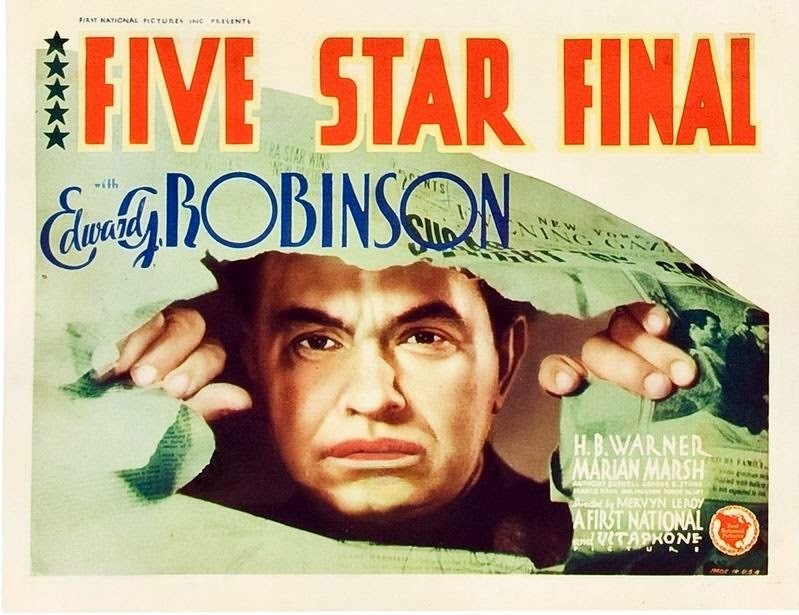 "No wonder the paper is rotten. We need more drunkards."

Robinson plays Joseph W. Randall, the editor of a city newspaper, the Gazette. The Gazette has typically been a trashy tabloid. but Randall has generally ethical instincts and prefers to cover serious, hard news. The newspaper's owner, Mr. Hinchecliffe, does not agree, and furthermore is upset by the Gazette's declining circulation. Hinchecliffe orders Randall to sleaze up the paper again in order to bring readers back.

The staff at the Gazette hit on an idea: re-visit the Nancy Voorhees case. Nancy Voorhees was a stenographer who, twenty years ago, shot a man after he knocked her up and refused to marry her. She was acquitted at trial, and the newspapers discover that she subsequently got married and has been living for years as Nancy Townsend. Nancy has buried her past well enough that Jenny Townsend, the daughter of her unfortunate liason, thinks that Nancy's husband Michael Townsend is her father. This happiness is endangered when the Gazette starts snooping into Nancy Townsend's life.

Five Star Final was made hard on the heels of Little Caesar, the film that made Robinson a star. It features Boris Karloff as Isopod the sleazy reporter; Karloff's own Star-Making Role in Frankenstein came out two months later.

Was remade in 1936 as Two Against the World (aka One Fatal Hour), moving the setting to a radio station, and starring Humphrey Bogart.