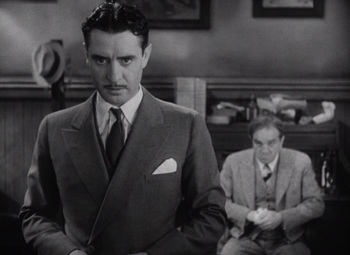 Gentleman's Fate is a 1931 drama film directed by Mervyn LeRoy.

Jack Thomas (John Gilbert) lives pretty much the ideal life, lounging about in a luxurious New York City apartment, enjoying an income left for him by his deceased parents rather than holding a job, and also enjoying a hot girlfriend, Marjorie (Leila Hyams).

Shocking news from the guardian of his trust fund upends this happy story. Jack learns that the story he's been told of being orphaned as a baby isn't true, that he isn't an orphan at all, and he isn't even "Jack Thomas". He's actually Giacomo Tomasulo, and the money that's supported him all his life comes not from an inheritance from dead WASP parents but from his father Francesco, a mobster and bootlegger who is alive but currently dying from a bullet wound.

Jack, summoned to his father's bedside, also meets his brother Frank (Louis Wolheim), who runs the family bootlegging business. His father tells Jack that Jack's mother wanted him kept away from their life of crime. Francesco gives Jack an emerald necklace to give to his fiancée...but when that necklace turns out to be stolen, Jack's life starts to unravel.

Anita Page turns up in the third act as Ruth, another love interest for Jack. Next-to-last film for Louis Wolheim, who died of stomach cancer a couple of weeks before it was released.